Getting to know: Guillermo Gallardo

Guillermo Gallardo debuted this weekend at the helm of Romania women’s national team as the group played in Ankara the third and last stage of the qualification process to the 2014 FIVB World Championship. Though they had a very short time to prepare for this tournament, his players performed well and even though their second place finish in Pool I was not enough to make the Worlds, there are many positives that the 43-year old Argentinean mentor can take from this experience. 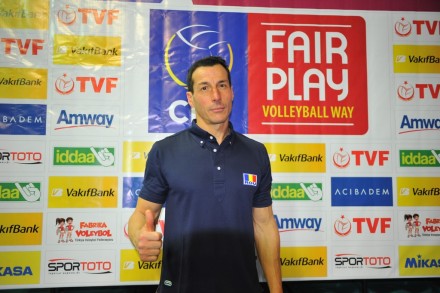 “Of course I am happy with what we achieved there” Gallardo says. “However, as a coach, you always want more but taking into account that we only had two weeks to work together, this was already a good start.”

Gallardo is well-known in Germany where he won twice the Bundesliga at the helm of Rote Raben VILSBIBURG in 2008 and 2010. After spending seven years in Germany – where he also won the 2009 edition of the national cup with Rote Raben – Gallardo moved to Switzerland for the start of the 2013/2014 season to work with Volley KÖNIZ. Only a few weeks ago he was appointed head coach of Romania for what is his first assignment with a senior national team. “I can only take pros from this experience; I received a warm welcome in Romania and felt good right from the first day” he says. “I immediately found a good way to work with the players, the other members of the coaching staff and the team manager and can only say that the World Champs qualifier in Ankara was a very good experience for me.”

Romania used to be a real Volleyball force back in the ‘70s and ‘80s but since then the national teams have found it difficult to make it to the international elite. In Ankara Romania beat Ukraine and Cyprus but lost in straight sets to Turkey to end up the tournament in second place and miss on a spot for the 2014 Worlds. “I think that the team has potential for improvement but there is a lot of work to do” Gallardo says. “I will try to help Romania and their players as much as I can, so that we can make a step forward and become more competitive also on the international stage. It is not going to be that easy but at the same time I am convinced that if we work hard, this is something that we can achieve.”

The team had traveled to Ankara without one of their star players, middle-blocker Nneka Obiamaka Onyejekwe, who currently plays in Switzerland for the likes of Volero ZÜRICH. “Nneka is a very important player for this team but even with her I think we would not have been able to beat Turkey. Maybe we could have won one or two sets, but as I said there is still a lot of work to do in order to stand a chance with the top teams in Europe.” 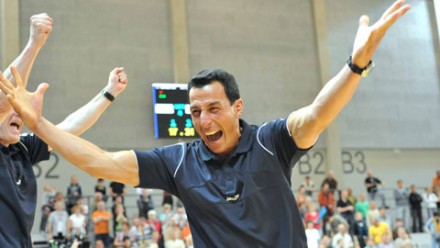 Born in Argentina, Gallardo has traveled the world, coaching in his native country, in Spain, Sweden, Switzerland, Germany, and now also in Romania. “I am very grateful because Volleyball and my work as a coach have given me the opportunity to live in different countries, get to know different cultures, and learn several languages. Of course I am traveling a lot but most of all I enjoy meeting people; I can learn a lot from each experience and my goal is to continue the same way also in the future” Gallardo – who is married to German player Nadja Jenzewski – says. “I have been away from Argentina for 17 years now; it is still pretty difficult to visit my parents at least once a year. I have settled down in Europe and I have my own family here, but sometimes I wish I could be closer to my parents. I can feel at home anytime I eat Argentinean food, most of all I like cow meat and a very good Argentinean red wine known as Malbec.” Though he enjoys good food, Gallardo does also keep an eye on his own conditioning: “I like doing sport, so I run every day and also work out at the gym twice a week. I like it and I need it in order to keep in good shape.”

Some weeks ago, while at the helm of Volley KÖNIZ, Gallardo crossed in the CEV Volleyball Cup the ways of Nikolay Karpol, one of the most legendary Volleyball coaches. “When I met Karpol, I told him that by the time I was a teenager I used to watch Volleyball on TV and promised to myself that one day I would meet him and we would drink vodka together” Gallardo recalls. “We played twice Uralochka in the CEV Cup and after the game Karpol invited me to join him for a drink. So 25 years later my wish turned into reality as I was sitting together with one of my idols and we were chatting about Volleyball.”

After a few good years in Germany, Gallardo moved to Switzerland for the start of the current season to work with Volley KÖNIZ, which is behind Volero the second Volleyball force in the Swiss national league. “Volleyball in Switzerland is not as popular as in other countries but I think this is going to change for the better in the future. We need more Swiss players in the national league and in our clubs, especially young players, but I think that the European Championship held last September in Zurich has been a good and unique booster to speed up the development of the sport in this country.”