Dominican Cristobal Marte Hoffiz was confirmed to continue as first executive vice-president of the International Volleyball Federation (FIVB) while Mexican Saul Castro Verdugo was selected to be one of the twelve members of the new executive committee. 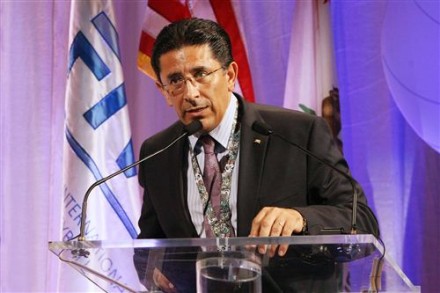 Guatemala’s Marta Centeno de Sajche will be also part of the executive committee as one of the two female persons of the gender in minority.

Andre Meyer of Luxembourg was appointed as second executive vice-president and Dr Amr Elwani of Egypt was selected as treasurer.

The decision formed part of the new measures taken by Dr Ary Da Silva Graca, elected last Friday as new president of the FIVB for the period 2012-16 by the World Congress in the first democratic elections in the history of the organization.

The FIVB Executive Committee, which is composed of 12 members – five confederation presidents and five members proposed by the President, plus the gender in minority persons – and the President, was also confirmed with the following persons appointed:

In addition, Italy’s Carlos Magri and Poland’s Miroslaw Przedpelski, were chosen as co-opted members for the upcoming World Championships.

Honorary titles were also given as follows: President for life Jizhong Wei (China) as President for life and advisor to the Board of Administration, and Theofanis Tsiokris (Greece) and Sivanthi Adityan (India) as vice-presidents.

ITA W: The Universal goes to France for the test with Cannes and Istres