After the last match of the year with Argentine national team, the players took some days to rest and start season 2013/2014 on their clubs. 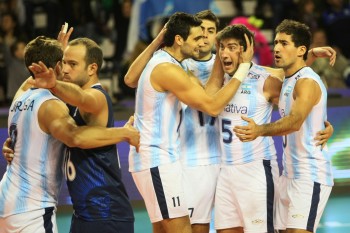 Last Saturday against Brazil in the final of the South American Championship was the last game these boys played for Argentina’s national team on this year. Now, it’s time to pack their suitcases and move to another city in the world to play volleyball.

After most transfers have been done, the players of Javier Weber’s team will go to prepare for season 2013/2014 on their clubs. Before travelling, many of them talked on their Twitter accounts about these previous hours. Former captain Rodrigo Quiroga said:

“Some holidays before the new Brazilian Super League year”.

The other outside hitter of the squad, Federico Pereyra was one of the most communicative:

“It’s always ugly the end of a year in the national team. Ready to flight to San Juan, my dear land, to enjoy a few days to rest. Next Sunday I’ll go to my club on Belgium, the moving is ready”.

Libero Facundo Santucci was rushed on his last day in Argentina before travelling to France to play on Spacers Toulouse and wrote:

“Only one day of holidays and a lot of things to do”.

While his friend Nicolas Bruno like opposite Bruno Romanutti enjoy his week of rest at home, then they will travel to Italy and Poland respectively to start training again.

One who won’t have holidays is Pablo Kukartsev, the urgent replacement of Ivan Castellani with promising future who will travel today to Italy with U21 national team on a tour previous to the World Championship in Turkey.

The particular statement of the day came from Captain Luciano de Cecco who didn’t express the same euphoria than his teammates and said:

“The year of national team is over, it was really hard and tough! Enough volleyball for some time, need to clean all the bad things. Thank you!”. The setter needs a break before the departure to Italy with the objective of becoming champion of A1 League.

All of them are prepared; a new season is coming soon!

To read more articles from this country click on Argentina.