As programmed, last Saturday took place the first meeting of the 2012 Sport Organization Secretariat with the participation of province delegates and officials In the same the next competitions were organized among several subjects that included its changes. 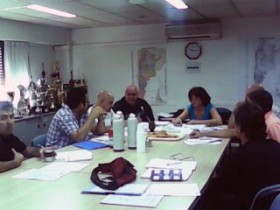 The main goal is to federate its work inviting all the country delegations to come and work towards the inclusion of all country at the Secretariat.

Also were included Celia Montaruli, José María Cuadrillero, Fabián Ramón and Daniel Tarando, as this Secretariat officils. Also, were at the meeting as part of the inclusion of all interested parties, Sergio Tacchella and Norberto Arese representing the Argentine Volleyball Club League Association (ACLAV).

The Secretariat working area will suffer changes, as all Argentine Volleyball Federation parties, including supervision that will first learn all about Sport Organization.

The work will include the Argentine Cups for the second part of the year with reference to fees, quantity of teams participating and playing schedule (to be approved by FeVA Board of Administation that will meet next May) and the National Championships, with the first one being played in Entre Rios for the U 18 category.

Also the Women A1 League was included working the FeVA and the ACLAV together to improve the goals of the same. Quota for that competition was also among the date subjects. New format and new quota for each region to widen the competition to the whole country.