In the opening match of the South American Men Qualification Championship towards the London Olympic Games 2012, Venezuela defeated Columbia 1-3 (17-25, 26-24, 15-25, 15-25). Liberman Agamez was the top scorer with 22 points while Luis Díaz was the star and best scorer for Venezuela with 18. 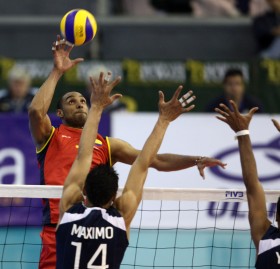 Both teams stepped onto the field with nerves and they did not show their best performance. Iván Marques, as middle and opossite player at the same time lead Venezuela good job but Colombia got at the first TTO the leadership 8-6.

Nevertheless, Luis Días, first with a terrific blocking over Liberman Agamez and then with an ace put Venezuela on the top of the score by the second TTO 14-16.

Their confidence made them keep growing in quality on the hands of Iván Marquez and Luis Díaz winning the first set.

On the second set, both teams kept a hard equality until the second TTO 16-15, mainly with both teams scoring with their middle players. Columbia then got a slight leadership but the set was levelled at 21-21. Venezuela kept fighting but finally Columbia in its third set point with a spike of Agamez closed it 26-24 equalling the series 1-1.

Then, for the first time in the match, Venezuela got the lead from the start and arrived to the TTO with advantage with Díaz putting pressure serving against a rival that could not find its path (6-8). More mistakes from Columbia and good blocking of the rival helped Venezuela to reach the 2nd. TTO 11-16 and as on the first set, Luis Díaz service helped them at the end to close the set and put the series 1-2.

Venezuela started also very well on the fourth and definitive set with Díaz once more shining. Jose Carrasco setting did not allow the rival concentrate with Venezuela scoring an ace of Marquez 11-16. From there on, Venezuela played very comfortable and Colombia could not fight back to force a tie-breaker.