This coming Wednesday, January 16, Germany’s SCHWERINER SC will be playing Italy’s champion Unendo Yamamay BUSTO ARSIZIO in the first round of the Playoffs 12 for the 2013 CEV Volleyball Champions League. This and other volleyball news read on Worldofvolley.com. 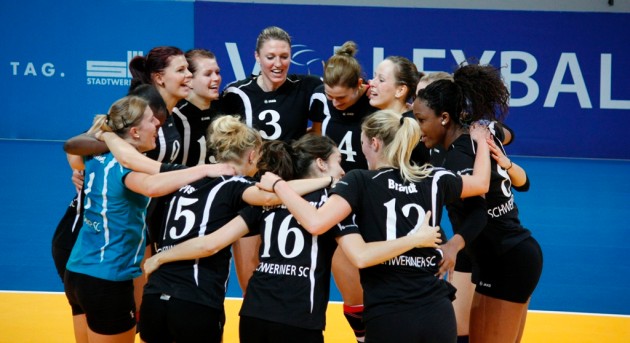 These teams crossed their ways already last year in the Challenge Round of the CEV Volleyball Cup with Yamamay claiming a 3:1 win to make it to the semis and then continue their fabulous run to eventually take the trophy.

The head-to-heads include also another double header played in the 1/4 finals of the 2010 CEV Volleyball Cup where the Italians scored once more two wins accelerating their march that did end with Yamamay claiming their first European title.

Starting from this negative record, the players of SCHWERINER SC will be very motivated to stop that streak and possibly claim a home win that could boost their confidence and help them make it to the Playoffs 6.
However, it won’t be easy as BUSTO ARSIZIO signed for the current season two members of Germany’s national team, Margareta Anna Kozuch and Maren Brinker, plus Valentina Arrighetti who has been one of the most effective blockers of the prelims alongside teammate Christina Bauer.

SCHWERINER SC, on the other hand, has contracted five new players for the 2012/2013 season including Dutchwoman Quinta Steenbergen who finished the prelims of Europe’s most elitist competition as third most effective spiker.

AS PROMISED – Guidetti jumped into a...