Usually, it attracts young German talents when the opportunity abroad presents itself, but Schwerin SC managed to commit the opposite Saskia Hippe. After two years abroad, the young German national team player signed for SSC. 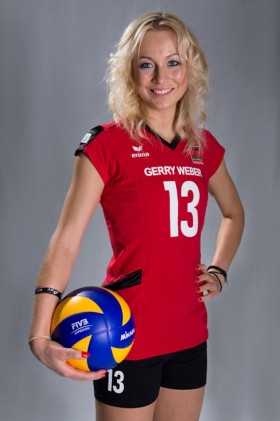 Born in Berlin, she began practicing volleyball at the age of 9 in Köpenicker SC. In 2008 she moved to Dresdner. There she won the domestic title and the Challenge Cup in 2010. She dared to move abroad in the 2011/12 season. After a year at Chieri Volley Club in Italy, she spent a season in VK Agel Prostejov from the Czech Republic.

She will meet her former teammates from Prostejov again this year because of Schweriner SC and VK Agel Prostejov will play against each other in the group stage of the Champions League in late November in Prostejov and on 4th December at the “Arena” in Schwerin.

SSC coach Felix Koslowski is pleased that “one of our greatest talents in Germany, which, despite her age of 22 is already very experienced international player” has chosen to come to SC Schwerin.

As assistant of a German coach, Koslowski currently holds Saskia Hippe at the national team in Thailand. In Bangkok, the German selection expects this weekend to play matches against Thailand, Puerto Rico and Russia at the Grand Prix. Hippe will enter to the SSC trainings after the European Championships in mid-September.

See the profiles of Hippe and SC Schweriner.