GER M: VfB FRIEDRICHSHAFEN out of race for Bundesliga after seven consecutive titles

It was not an April’s fool as this past Sunday Germany’s cup winner and 12-times participant in the CEV Volleyball Champions League VfB FRIEDRICHSHAFEN lost the semifinal series of the Bundesliga to BERLIN Recycling Volleys. 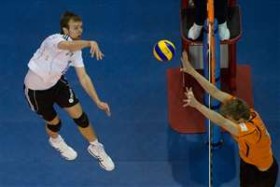 Germany’s most successful club of the past years won the first duel 3:1, but lost the following three matches in row 2:3, 1:3 and 1:3. This is the first time in eight years that VfB FRIEDRICHSHAFEN does not qualify for the finals of the Playoffs.

This defeat does also end the great winning series of FRIEDRICHSHAFEN that was crowned Germany’s champion for the past seven consecutive years. The final will see BERLIN play Generali UNTERHACHING while VfB FRIEDRICHSHAFEN has to settle for third.

“The season has finished – so early as almost never before”, stated head coach Stelian Moculescu. “Now we are drawing very much attention from the media as well as from the public. If we had won again, it would not have been interesting news for anybody”.

After the fourth and decisive defeat in front of more than 7’000 spectators in Berlin team captain Joao José was evidently disappointed. “BERLIN did not show anything special. They did neither serve nor spike very hard”, he said. “But we were not able to react and play well”.

Also middle blocker Marcus Böhme felt down: “I cannot realize that we are really out of the competition. I am not sure if we tried everything we should during these semifinals. Maybe we could have showed more. Sometimes we certainly could have played better”.