Middleblocker Felix Ficher Will wear the jersey of BR Volleys. 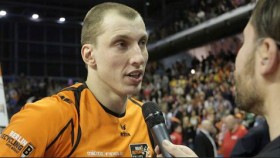 The team and the player for the national team agreed to continue cooperation in the upcoming season. The team of the Capital Club for season 2012/2013 is complete.

The contracts with Scott Touzinsky and Felix Fischer should be extended.With Jaroslav Skach and Urpo Sivula is being negotiated. Paul Carroll, Tomas Kmet and Kawika Shoji have signed a contract until 2013.

Setter Jaroslav Skach BR left. Setter Sebastian Kuehner was the first who signed. Urpo Sivula is still uncertain. All remaining players from the championship team had their contracts renewed.