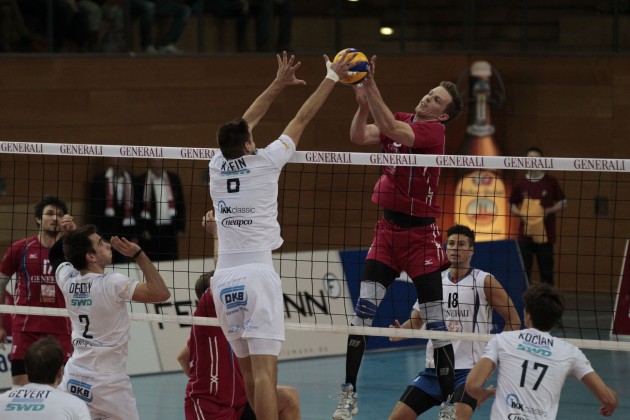 Generali’s head coach Mihai Paduretu knew right from the start of the 2013 CEV Volleyball Champions League that for his team MACERATA is out of this world. “They are playing in another league. As soon as they play to their potential we don’t stand a chance to win the match. A set, maybe” he said and was proven correct in last week’s match against the Italians at Generali Sportarena when the hosts lost 0:3.

However, after winning 3:0 against evivo DÜREN in the Bundesliga on Sunday Paduretu’s assistant coach Camilo Glober pointed out that Generali is “not on vacation” in Italy. “It won’t be easy, but if we give our best we might at least win a point”, he said.

Every point is precious these days for not all second-ranked teams from prelim Pool play will advance to the Playoffs 12. After three legs UNTERHACHING is the worst of the second-placed teams and is therefore counting on wins against ASSE-LENNIK and LJUBLJANA – as well as on its opponent on Wednesday night. “Should MACERATA finish Pool play with seriousness even after qualifying it should work out for us in the end”, Paduretu says.

But first, libero Sebastian Prüsener recommends taking it easy on Wednesday. “It is an easy match. For us every point will be a success”, he says. Tom Strohbach, Huib den Boer and Roy Friedrich are doubtful for the match.

Catch Srećko Lisinac if you can (VIDEO)