Palazzo Galli, one of the most iconic venues in the city of Piacenza, was the venue where the players of Copra Elior were introduced on Saturday to the media as well as to their fans. A very pompous presentation that was somehow living up to the status as well as to the expectations of Italy’s vice-champions whose goal is to perform well in the national league as well as in the 2014 CEV DenizBank Volleyball Champions League. An ad-hoc press conference specifically devoted to their campaign in Europe’s elite club competition will follow next week. 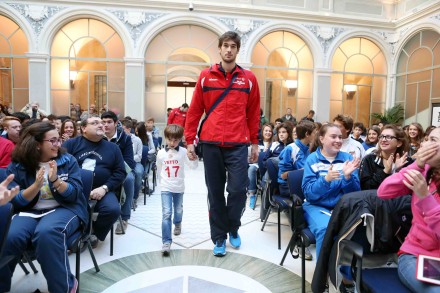 The audience in attendance was quite special as it included 250 students from the local sports high schools. The players entered the stage accompanied by young kids – aged 4 to 5 – from a kindergarten (see picture with Luca Vettori) and after that they had to answer the questions prepared by their fans. The high-school students were curious to know a little bit of everything about the team, especially when it comes to what happens in the backstage. The players revealed the way they organize their away matches, they celebrate their victories and cope with defeats or injuries. They also had the opportunity to touch upon other important items such as the fight against doping or fair play.

Club President Molinaroli also took the floor and said: “Before we start discussing about the expectations for the coming season, we have to look at the past results. As far as I can see, the group we have put together this year is probably the strongest we ever had here in Piacenza.”

Head coach Luca Monti added: “My role is quite complicated; it is a very easy one if you win but the most difficult moments come when you lose. The first one to be called upon is the coach even though everyone is co-responsible for any victory or defeat.”

Luca Tencati addressed a few warm words to the audience: “Sport is extremely important for every young boy and girl. It helps you find a way to interact with people, it makes you feel good and you develop a different approach to life. Any difficulty you may find in sport can be compared to those that each of us will be confronted with in their life.”

Team captain Hristo Zlatanov concluded by explaining the importance of each member in the group: “Each member of the team is a captain. The group is as strong as each individual player and its strength stems from the positive values that every player is bringing to the team.”

POL M: Two big surprises at the start of Plusliga