Unendo Yamamay BUSTO ARSIZIO claimed their second win in the prelims of the 2013 CEV Volleyball Champions League by edging ASPTT MULHOUSE with the score of 3:1. You can read all relevant news from volleyball world on Worldofvolley.com. 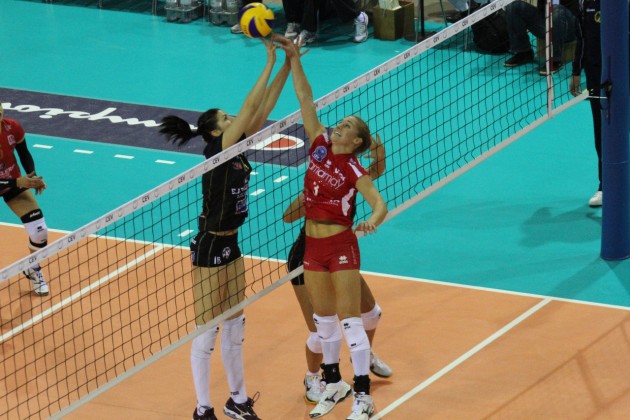 Even though the hosts started quite well, BUSTO ARSIZIO got the lead by the first technical time-out (8:6) especially via a series of good blocks but MULHOUSE did not let it go, playing superbly in defense and anchored by the spikes of Tatjana Bokan. The guests from Italy still had a margin of two by the time the second mandatory stop was called and gradually stretched that lead with their captain Christina Bauer finishing it off at 25-19 with a block.

The second set was played point for point before BUSTO ARSIZIO showed some problems in defense and via the points scored by Bokan and Anna Rybaczewski ASPTT MULHOUSE could move to the front (13:10). However, Yamamay quickly found its way back into the game but Bokan restored the balance at 23 all. MULHOUSE dissipated three set balls as the fans were following the actions of their heroines standing on their feet before BUSTO ARSIZIO silvered its second opportunity for the 2:0 with Francesca Marcon.

The score remained tight for most of the third set with Bauer standing out for Yamamay and the home side responding with Bokan and Rybaczewski. The guests got nervous and started even questioning the decisions of the referees as they were trailing 22:16. The 3’000 home fans finally got something to celebrate as via some great team work MULHOUSE could claim this section of the match (25-20) with Iuliia Ferulik scoring the last point.

BUSTO ARSIZIO got back on track in set 4 with Valentina Arrighetti and Margareta Kozuch that paved the way for the provisional 8:4 and even though Bokan and Ferulik played well for the local side, the Italians kept control of the operations (11:6). Some changes asked by home mentor Magali Magail did not help stop the Italian march (21:15) and Kozuch finished it off at 25-20 for the final 3:1.

Tatjana Bokan top scored in the end with 28 points while Yamamay was paced by Juliann Faucette with 19.