WC W: Ticket to third round is sole goal for Slovakia’s ladies

Slovakia women’s national team is ready for the start of its adventure in the 2014 FIVB Volleyball World Championship with the group set to play this weekend a first-round qualifier at Poprad where the home side will test out the likes of Austria, Greece and Liechtenstein. “Our only and sole goal remains to finish first in the group” head coach Miroslav Cada says. 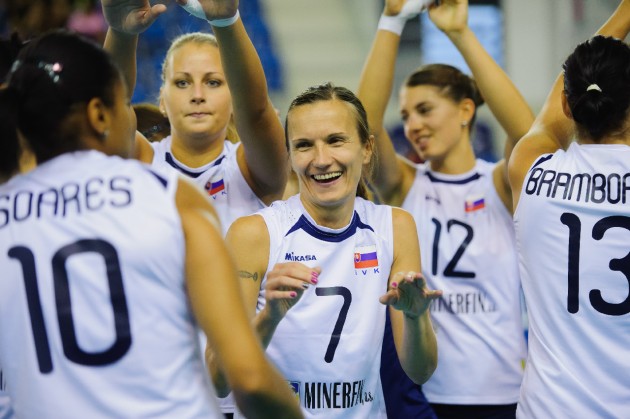 “Our only and sole goal remains to finish first in the group” head coach Miroslav Cada says. “We have had a very good preparatory phase and we feel well ready for the start of the season” he adds. Cada is mentoring Slovakia’s national team for the twelfth consecutive year and for that reason he’s somehow associated with the long-time manager of Manchester United F.C., Sir Alex Ferguson, who has been at the helm of England’s soccer standout for 26 years.

After a training camp held in Bojinice, the Slovak players moved to the venue of the World Championship qualifier, the lovely city of Poprad which is situated at the foot of the High Tatra Mountains. “We played three friendly games with Belgium here and though we lost all of them, we did improve match by match”. Cada is pleased with the tournament taking place in Poprad: “Everything here is just great. There is a good hotel for the team, a state-of-the-art sports hall and I want to thank our Federation for the support they have been providing. We want to pay back their work with some good performances on the court” Cada stresses.

“Though we respect our opponents from Austria and Liechtenstein, we assume that Greece will be our toughest opponent in this tournament” Cada adds. He is being assisted by Monika Smak (pictured, #7), one of the best Volleyball players in Slovakia’s history, who – at 39 years of age – is still active as a player too. “We have got some information about Greece and we will get more here in Poprad as they will be our last opponent in the group and we will be able to scout their play with more accuracy. As for Smak, she is adjusting to a different role but she is always ready to join the game and help the team” the Czech-born head coach pointed out.

This tournament is a very good preparation also for the third and last qualification round scheduled for early June and whereby Slovakia will try to make it to the final round of the 2013 CEV Volleyball European Championship hosted by Germany and Switzerland in September. In order to get that much desired ticket, Slovakia will be playing Belarus first away on June 1 in Mogilev and then five days later in Poprad for the return game at home.