After sweeping all of their matches this past week in Vienna, Belgium prolonged their winning streak in prelim Pool A of the 2013 CEV Volleyball European League by seeing off the hosts of Denmark in straight sets (21-17, 21-18, and 21-16) on the first day of second-round action at Antvorskovhallen in Slagelse. This and other volleyball news read on Worldofvolley.com. 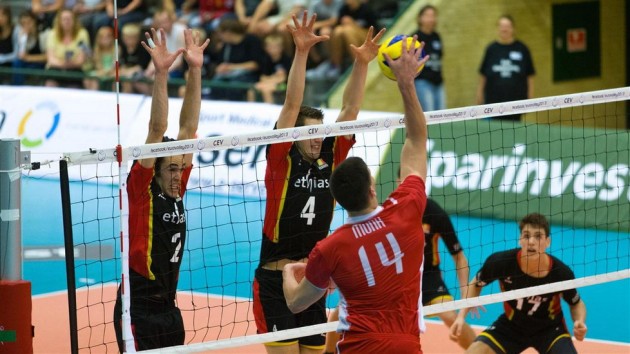 Though Denmark played a good second set, Belgium was too strong for the hosts thereby scoring a straight-set victory. Belgium caught a good start (4:2) before Denmark found their way into the game (5:5). With a series of good actions Denmark could keep the score close up to the technical time-out before Belgium asserted their supremacy in the final rush to seal the 21-17 that meant a provisional 1:0 lead in sets. Denmark came out strong in set 2 going up 4:1 with an ace by Daniel Thomsen. The home crowd in Slagelse was literally delighted to see their heroes move up 7:3 after a spike killed by Rune Huss and with the help of their top scorer Mads Ditlevsen could then stretch the lead to 10:5. Belgium did not surrender that easily but still Denmark did set the pace of the game at the technical time-out (12:8). Belgium fired back to flip the charts round at 15:14 and did keep control of the operations for the 21-18 and 2:0. Belgium stretched momentum to set 3 (6:3) but Denmark could reduce the gap to one point (8:7). After claiming a margin of three points at the technical time-out, Belgium changed gear moving up 16:10 and pocketing the 21-16 that did seal a well-deserved 3:0 victory where Bram Van den Dries top scored with 18 points with two more players – Simon Van de Voorde and youngster Tomas Rousseaux – finishing in double digits with 12 and 11 respectively.

“We have got experienced players so the fact that we played before the Danish crowd was not a problem at all for us” Belgium’s head coach Dominique Baeyens said. “We knew that Denmark would be very motivated but I think we did control the game quite comfortably except for the second set where we made many mistakes. We were nevertheless able to reduce them, we kept cool and in the third set we got back control of the game again. Last week we scored three wins in Vienna but there are still a lot of matches to play. Though we have changed some players in the group we keep our consistency and this is very important for me as a coach”.

“The Danes were very motivated and they played well” said Van den Dries, top scorer for the winning side with 18 points. “We did not play our best but we did so in the key moments of the match. We are happy with this win because it is always difficult to start by playing the home team. The second set could have gone another way but we are happy with this win. In the second set we made too many mistakes but then we regrouped and could play better in the third. We could also stabilize our defense and everything worked better. We caught a good start in this tournament and I am satisfied with my performance today”.

To open the second round of play in Pool A, Austria followed up on last weekend’s home win over Slovakia cruising past the two-time winners of the European League 3:1 (13-21, 21-17, 21-17, and 21-18). The match actually did not start that good for Austria. Slovakia got control of the game right from the early phases of the first set going up 10:5 and 12:9; the Slovak did never look back and could pocket that section of the game at 21-13. However, things changed dramatically in the second set where Austria opened with a 5:3 lead to continue with a series of good attacks for the 9:6 and 12:9 at the technical time-out. Slovakia drew level at 14 but Austria bounced back to 17:15 on a couple of Slovak errors. Peter Wohlfahrtstätter killed the next spike and that paved the way for the final 21-17 and 1:1 in sets. Austria showed that same momentum also in the second set (5:3) and the score remained very tight before Austria’s offense contributed a 12:8 lead at the technical time-out. They continued to score with good consistency (18:13, 20:15) before Philip Schneider finished it off at 21-17 for a 2:1 lead in sets. After a close start (3:3), slowly but surely Austria got control of the operations also in the fourth set (8:5, 15:10); Slovakia attempted a possible comeback closing the gap to one point (15:16) and forcing Austria’s head coach Michael Warm into a time-out. However, that was all for Slovakia for Austria found back their best play and cashed their second match ball for the final 21-18 and 3:1 victory. Marcus Guttmann top scored in the end with 17 points while Matej Patak paced Slovakia in their losing effort with 14.

“Last week we did realize that we could stand a chance and beat Slovakia but we knew we had to fight bravely for this” Philip Schneider commented. “We did not serve good in the first set but then we gradually got control of the game and in the end we won. We hope to win as many matches as possible this weekend”.

“We started out really bad while Slovakia served well but after the first set we found the right pace and got control of the game” Michael Warm says. “We played with only one middle-blocker and we changed a lot in the other positions. We played with glowing hearts and were motivated to win. We are happy with beating Slovakia twice in a row especially as they finished fifth in the last edition of the European Championship. That’s a big success for us. We scored the key points and I also have to say that my players were mentally on top today”.