NORCECA Confederation regrets to inform the passing away of Mr. Angel Ramon Rico of Curacao, one of the founders of the institution, at the age of 92. 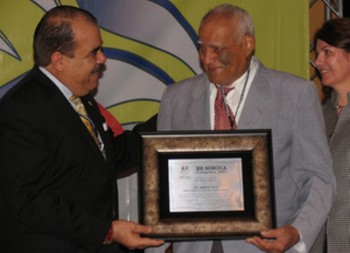 As president of the Netherlands Antilles Volleyball Association, Mr. Rico was part of several commissions of NORCECA and attended the FIVB Congresses in Atlanta and Tokyo.

In 1999, Mr. Rico received the NORCECA Merit Order and the XIX NORCECA Congress in Aruba was dedicated in his honor.

“Mr. Rico was a wonderful human being and he will be fondly remembered and greatly missed by all those who were recipients of his advice and wisdom during his active years in volleyball and sports,” President of NORCECA, Cristobal Marte Hoffiz said.

He started his long career in volleyball back in 1952 and presided over the NAVOBO Association during four different periods, the last one from 1991 to 1994. He was the Chief of Mission for the Netherlands Antilles delegation that took part in the Twelfth Central American and Caribbean Games held in Santo Domingo in 1974.

A permanent resident in Curacao since the early age of 8, Mr. Rico worked more than four decades for Lands Radio Dienst and after his retirement he became a member of the Sociedad Bolivariana of Curacao.

One of the most respected members of the society of his country, the Venezuela-born Rico received numerous recognitions including the Honor Medal by the Netherlands Government in 1970, and the Francisco de Miranda in two grades (1979 and 1981), the Andres Bello (1987) and the Liberator Order (1992) by the Venezuela Government.