Iran started off their campaign at the FIVB Volleyball Men's U21 World Championship with a 3-1 (22-25, 25-11, 25-17, 25-22) victory over Estonia in the first Pool B match played at Baskent Volleyball Hall in the Turkish capital Ankara. 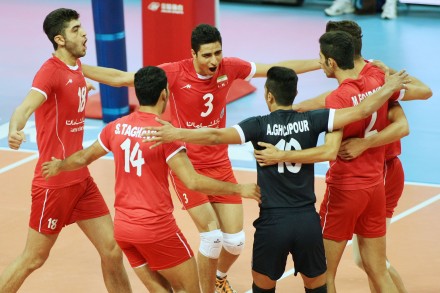 The Iranian team celebrates a good performance against Estonia

Estonia’s great blocking efforts helped the team take control at the beginning and at the end of the first set in spite of the several aces that Iran managed to score to come from behind and maintain a lead through the middle part.  The 25-22 outcome of the first set in favour of Estonia prompted an immediate reaction from the Asian team.  The Iranians established complete domination on court and closed the second set off at 25-11.

The exceptional serving performance of Iran, particularly by captain Javad Hosseinabadi (5 aces in the match), continued as the team broke away in the third set.  The European team tried to fight back and almost caught up in the score, but their excessive unforced error in the conclusive moments enabled their opponents to win it by 25-17.  A fierce battle between Iran’s continual attacks and Estonia’s fantastic blocks marked the beginning of the fourth set.  The team around coach Urmas Tali gained an edge, but could not hold on to it.  Once again, too many mistakes in their play allowed Iran to achieve an incredible run towards the final 25-22.

Iran’s Javad Hosseinabadi and Estonia’s Renee Tepan became the top scorers of the match with 19 points each.  The winning team’s strong weapon, the serve, brought them an impressive 10 direct points towards the victory, while Estonia managed to score 11 points on block.

Photos from this match can be viewed here