Turku, Finland, March 8, 2012 – The world's biggest outdoor youth volleyball tournament, the Power Cup in Finland is gaining in popularity with nearly 6,000 children aged from 7 to 22 years of age in 719 teams already registered for the annual tournament, which will be held in the beautiful harbour city of Turku from June 7 to 10. 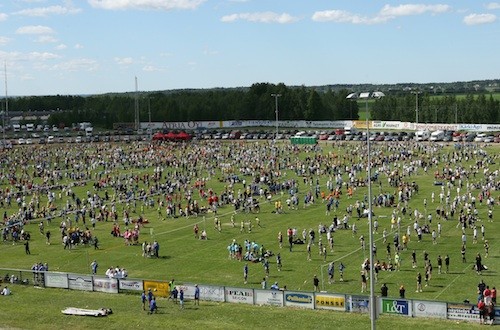 The Power Cup, which started more than 20 years ago, is part of one of the FIVB’s biggest development events – the FIVB Volley All Festival – which continues to help promote the fundamental aspects of volleyball and beach volleyball to children and their parents, giving them the opportunity to participate in a special outdoor and open environment.

Launched in 2006, the Volley All Festival runs every year during the last weekend of June and the first weekend of July and teaches youngsters and adults alike the main rules and regulations of both volleyball and beach volleyball in a relaxed and fun-filled environment.

The Power Cup traditionally receives many foreign visitors from the likes of Sweden, Iceland, Estonia, Russia, Scotland, China and Italy with 14 “international” teams have registered for the 2012 edition. The dead line for registration is May 4.

“We are very happy that in Turku there will be an increasing amount of very young players from 7 to 11 years old,” Power Cup project manager Mrs Päivi Harri said. “There are a lot more teams in these age groups than in Lahti and many of the younger kids have just started to play volleyball.”

The tournament will take place at the beautiful Kupittaa outdoor sports area, almost in the middle of Turku. During four competition days more than 5,000 exciting volleyball games will be played in addition to an opening ceremony, disco for kids and a match in which the Finnish women’s national team will play against another national team.