The city of Bardejov – which is located in eastern Slovakia – will be hosting this week one out of four second round qualifiers for the 2012 CEV Junior Volleyball European Championship – Women. The hosts will play there the national teams of Switzerland, Azerbaijan, Bulgaria, Austria and the Netherlands with the winner of this group eventually qualifying for the final round which is scheduled for mid August in Ankara, Turkey, while the second and third-ranked teams will have an additional chance to make it there through a third qualifying round slated for early July. 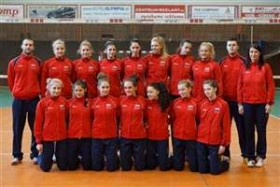 The home team is currently sidelined by many injuries but the group remains solid after displaying some good Volleyball last year while attending the Youth European and World Champs held in Turkey’s capital city.

“We have to deal with many injuries and we will be missing some key players for this home tournament” says head coach Eva Kosekova. “However, we are in a good mood and we have added some talented girls to the group, so I hope that we will finally achieve our minimum goal which is to advance to the next and last qualification round” she adds.

“We know pretty well our neighbors from Austria and I have scouted matches of Switzerland, the Netherlands and Bulgaria. All teams are very strong and I expect tough matches in Bardejov. All of our opponents did not qualify for the final round of the Youth European Championship last year but they have improved a lot and they are much stronger when it comes to the junior division” stresses Kosekova.

Slovakia will try to exploit the home advantage especially since Bardejov is a Volleyball city where fans are known for being very passionate and the matches of the Slovak teams are regularly attended by a full house.

“We have a fan club here in Bardejov, they have regularly visited us and they have even presented us with some nice gifts. We have spent a week here to get ready for this tournament and I am pretty satisfied with our preparations. We played three friendly matches with Poland which is a very good team and even though we suffered three defeats, I am pretty happy with the quality we displayed there” concludes Kosekova.