Radostin Stoychev, the sacked coach of Bulgaria's national male volleyball team, had agreed after all to lead the players at least until the Olympic qualifier in Sofia between June 8 and 10. 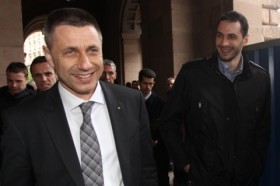 Stoychev, however, says that his one condition is the resignation of the Chairman of the country’s Volleyball Federation, Dancho Lazarov.

The coach stresses he has changed his mind this over the insistence of Prime Minister, Boyko Borisov, and for the players.

At an emergency press conference Thursday, Stoychev read a statement, but refused to answer any reporters’ questions.

In the statement, he explained that after the Wednesday meeting with Borisov and talks with the team, he had firmly decided to head it because no one else could become familiar with the work in 3 weeks. The coach said that later in the day, he stumbled on an interview with Lazarov in “Pressa” (Press) daily where the latter accused him of selling the game against Germany and of being ill-intended towards the team.

“I am staying at the post until the qualifier. If by then Lazarov does not resign, I would. We will do everything possible to make the Olympic cut. My decision is final. I thank the PM for his manly behavior and the players for their support,” Stoychev concluded.

The general public and several key national team players have criticized the Bulgarian Volleyball Federation for its decision to fire Stoychev, who learned about his own dismissal from the media. Star player, Matey Kaziyski, said he considered quitting the team.

On Tuesday, Italian Silvano Prandi declined the invitation to return as head coach of the national team, explaining that he does not believe the Federation can cooperate with him in a proper manner.

Borisov, Stoychev and Sports Minister Svilen Neykov met on Wednesday. During the meeting, the Prime Minister demanded that Stoychev be reinstated as the national team’s coach.

In the aftermath, Stoychev was offered to return as the Bulgarian national volleyball team coach, an invitation he initially declined.