Volleyball Coach, Matias De Fulvio of Argentina has been working for two weeks now in British Virgin Islands as part of the development plan of NORCECA Confederation for its National Federations Category I and II. 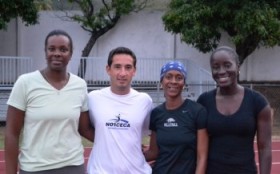 NORCECA has been distributing playing surfaces to National Federations in order to offer the players better training conditions along with the ambitious program of training teams as they embark to participate in the first round of tournaments towards the 2014 FIVB World Championships.

Coach De Fulvio is an experienced coach who worked for several years in the Italian League and also in his native Argentina.

After that in Puerto Rico and Cuba before landing in Tortola where the plan is to stay for a month.

The British Virgin Islands Volleyball Association is presided over by Mrs. Sabinah Clement who is also member of the NORCECA Board of Administration and the Legal Commission.

The purpose of his stay in the island is to help the national teams both men’s and women’s ahead of the FIVB World Qualification Championship Tournament scheduled here from June 7 to 10 at the Multi Purpose Sport Complex.

The Argentinean instructor is enthusiastic about the athletic tools of the male group that includes very tall players with sound potential. In the women’s case it is a work in progress but he also sees a lot of room to improve in the mid-term.

He has been working with both sides in improving the physical condition of the players but also refining their playing skills.

The women’s team will face the competition of Dominica, Antigua and French Saint Martin while the men’s side will meet the challenge from Dominica, St. Kitts & Nevis and Montserrat. The top three teams of each tournament will advance to the second stage of the elimination process in 2013.

During his time in the British Virgin Islands, De Fulvio hopes to meet with local coaches and give them some advice on how to develop the game.

RUS W: Ruslan Olihver – Hooker is a great acquisition, but acquisitions are not completed