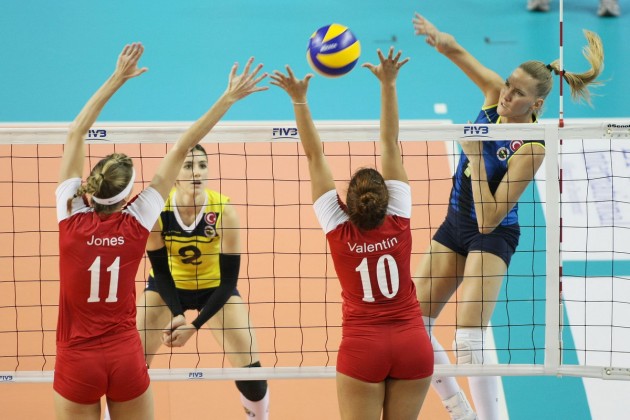 Berenika Okuniewska and Eda Erdem were the top scorers of Fenerbahce with 13 points apiece. Seda Tokatlioglu and Paula Pequeno followed with 12 and 11 respectively. Lancheras’ Yarimar Rosa had a match-high 16 points.

The winners held advantages of 8-3 in blocks and 9-1 in service aces. Okuniewska finished with four blocks while Tokatlioglu served three aces.

Okuniewska served an ace to cap her early attack against Lancheras as Fenerbahce led 8-3.  The Turkish club was in front 16-8 at the second technical time-out. Paula Pequeno joined Okuniewska as the top weapons of Fenerbahce while Jessica Jones produced for Lancheras. At 20-10 Okuniewska served her second ace. Rosa and Tokatlioglu traded spikes. After another spike by Rosa, Erdem scored for set-point at 24-14 and then served long. Steinbrecher’s attack was out of bounds but finally Del Valle’s serve sailed long. The set finished 25-16.

Fenerbahce took a 4-1 lead in the second set. Lancheras’ coach called for time-out. Okuniewska blocked Del Valle and Erdem landed her spike. Then Pequeno blocked against Torregrosa for an 8-2 advantage. Pequeno blocked Del Valle increasing the margin to 10-3. The gap widened to 14-5 after two aces by Pequeno. Rosa and Lopez scored consecutively for Lancheras. The Turkish team led 16-7 at the second stop following the ace by Erdem. After a lethargic streak of Fenerbahce, Rosa’s attacks put Lancheras within four points at 21-17. Tokatlioglu and Erdem reacted and the set concluded 25-17 with a wide attack by Lopez.

Rosa continue to spike effectively to guide Lancheras to an 8-4 lead. Pequeno and Tokatlioglu combined for consecutive spikes and then Tokatlioglu served an ace to narrow the distance to 9-7. Torregrosa blocked Steinbrecher but Erdem scored with a running spike. Steinbrecher’s spike and the ace by Erdem tie up the score at 11-all. At 13-all, Okuniewska landed her spike and Rosa attacked way long for the two-point difference in favor of the Turkish side. Okuniewska attacked again for the 16-13 score at the second TTO. Pequeno killed fo match-point at 24-16 and then served long. The hit by Steinbrecher closed the action at 25-17.

For more news from the World Club Championship click here.

FRA M: TOURS VB is back in action with Playoff spot as main goal