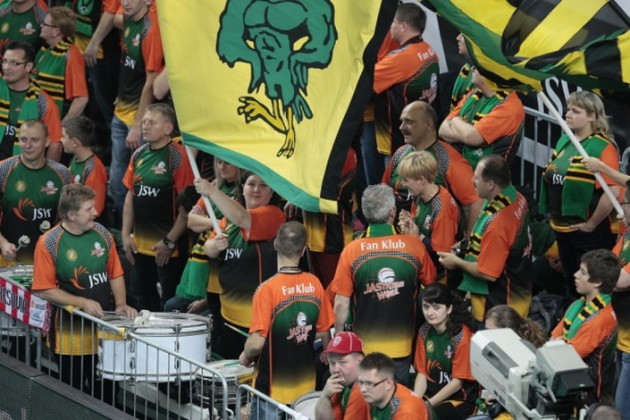 In the team of Jacek Nawrocki appeared Aleksandar Atanasijević, who has just returned to play after a knee injury, while for Lorenzo Bernardi team from the first minute played Krzysztof Gierczynski.

The match started better for Jastrzębski WEGIEL, they led with 8:6 before the first technical timeout. After Wytze Kooistra ace and a series of blocks on Atanasijević by Jastrzębski WEGIEL players hosts made a four-point lead (14:10), and Serb was replaced on the court by Maciej Muzaj. After the block on Russell Holmes by Daniel Plinski Jastrzębski WEGIEL run 16:12. But then the Skra had a series of great plays and Jastrzębski advantage dropped down to one point (16:15). Dangerous situation was quickly brought under control and the Bernardi team start leading (19:15). Then the coach replaced setter Pawel Woicki with Dante Boninfante. At 23:20 Serbian attacker returned to the pitch and his team won a point after the attack. At the end Jastrzębski Węgiel finished set with 25:23.

In the third set the good service gave Jastrzębski lead 3-2, and another successful attacks by Lasko and Kubiak expanded the lead. After the Atanasijević attack score was 8:4, and after the block on Serbian Jastrzębski team had the advantage of seven points (11:4). A series of attacks give Jastrzębski WEGIEL 16:11 lead. At the end Kooistra served in to the net for final score (25:18).