In an interview for the web site mim24.pl Italian Andrea Anastasi reveals how much he likes Poland and their fans. Also, he adds that one day he will return to Poland to work. 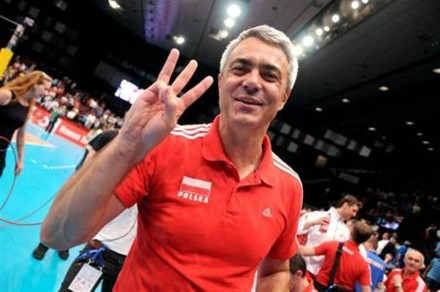 Do you think that the Polish team can be as successful as it was 40 years ago during the World Championship?

“Yes I have always believed in the possibility of winning, we talk about one team which is in the top of World Ranking.”

What do you think about Poland’s opponents in the first round of the WC?

“The opponents are really strong but everything is possible during the World Championship and Poland is a great team.”

Once you wrote „I am red and white”. After such a long time from saying goodbye to the Polish national team, are you still strongly related (maybe emotionally) with it?

“I lived three years for this team and this country and my feelings are strong. I can’t forget anything, I consider myself a lucky man because of that time.”

If you could make a decision now, who would be in your team?

“Interesting question but really I don’t want to think about this, now I’m only a coach, I’m not a commentator.”

Which event in Poland do you remember the most?

Do you sometimes think about coming back to Poland?

“Poland is my second country and I want to return to work there” said Andrea Anastasi.

See more news from this country on Poland.

RUS W: Terzić – “There are no bad teams in Russia”