Historic success of the Italian team! Busto Arsizio has defeated Chemik Police and qualified for the big finals of the CEV Champions League! 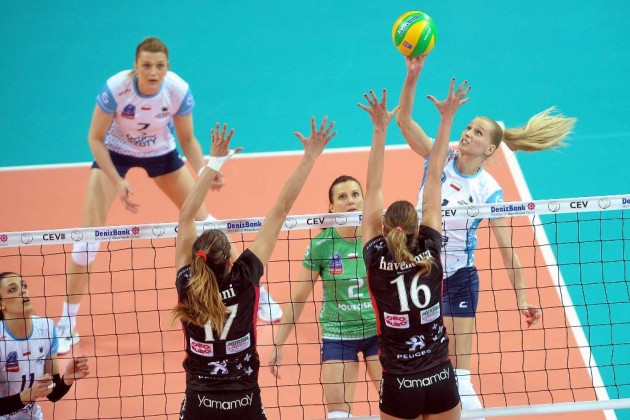 With packed Azoty Arena on their side, players of Chemik Police had a dream opening and escaped to 4:0 very quickly. However, Busto Arsizio obviously needed just a bit of time to accommodate to the whole atmosphere in Szczecin, and Italians managed to tie the score at 8:8. The game was tied until 13:13, when Busto perhaps performed the crucial run in the first set.

Away side used some mistakes of the opponent to take +3 lead at 17:14, and the margin remained the same all the way until 23:20… When Francesca Marcon spiked the ball into the net for 23:21, Polish fans started thinking that their team might make a late comeback… However, Ekaterina Lyobushkina scored a point with powerful spike for 24:21, and then Busto Arsizio finished the set with an ace! The away squad seized the opening set – 25:21!

The second set was almost the same as the first! Once again Chemik had a better opening, and had 11:6 at one moment. However, that lead has not lasted for a long time, as Busto Arsizio tied the game at 17:17, and then even escaped to 19:17 after a strong block on Anna Werblinska! But, Polish side was still not down. On the contrary… Chemik equalized the game at 20:20, then at 21:21, and finally at 22:22… Then, the home side managed to block Valentina Diouf for 23:22! Just a moment after, Francesca Marcon stepped on the rival’s side of the court and it was 24:22 for Chemik – two set points!

However, Valentina Diouf saved Busto! Italian star scored two points in a row and tied the result at 24:24! Malgorzata Glinka-Mogentale brought one more set point to Chemik – 25:24, but the Polish team failed to use it – 25:25. The punishment was inevitable. Ekaterina Lyobushkina was the heroine of the away team. Russian player blocked Anna Werblinska and Busto went in front at 26:25… Lyobushkina used the first set ball! She scored from a counter attack with a powerful spike and the Italian team was two sets in front – 27:25!

By losing the second set, Chemik Police also lost the confidence. While there was completely different situation in Busto. The Italian team went ahead at 8:3, then at 13:6, finally at 16:9… But, then Joanna Wolosz got injured! The starting setter of Busto suffered an ankle injury and had to be replaced. Chemik used that to approach to 17:14! Still, there were no any major comeback in this semi-final.

Helena Havelkova scored for 18:14, and then the same player made an ace for 19:14! While at the score 21:16, Wolosz returned to the game! With the starting setter once again on court, Busto Arsizio regained the big confidence and finished the game – 25:21, 3-0 in sets!