RUS M: Alexey Obmochaev – ”I have something to prove to Alekno”

New member of the Dinamo Moscow Alexey Obmochaev said that this season could change the role from libero to outside hitter and talked about why this summer has left Zenit Kazan. 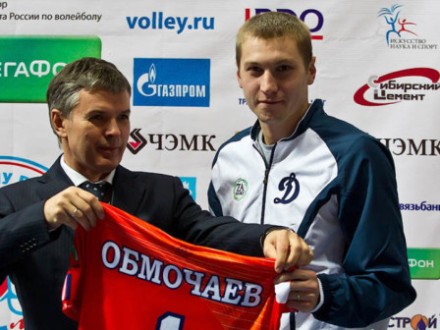 Alexey had to about ten minutes to take a picture or autographs.

“Wanted to be closer to my wife”

-Where is the most common place fans usually ask you to leave your autograph?

– I’m often asked to sign on their chest or back.

– Your wife Nataliya has been playing whole summer while you are on vacation. How is the time without her?

– I went home with my mother and to see relatives who have not seen.

– Perhaps your wife was the main motivation of your transition to “Dinamo”?

– Yes, I wanted to be closer to Nataliya. But other than that, I needed a change of environment. Wanted to work with another trainer.

– They calculated that in “Zenit” that you have already reached your peak?

– I had some problems with the coach, which I would prefer not to reveal.

– Now you have something to prove to Vladimir Alekno?

– Of course, I have. And we all have something to prove, having won “Zenit” (3:1) in the Cup of Russia it was a great win and a great surprise.

– We have read that you may be disqualified for two years for some reason?

– I read about it. This is a rumor from the internet. And I do not understand where they came from.

– “Zenit” – one of the leaders of the national volleyball. Don’t you think you will regret after leaving?

– At this moment I have no regrets. We have young team in Dinamo. Virtually no veterans. I am sure that “Dinamo” has a great future.

– In the summer it was reported that you can change roles and become outside hitter?

– We have discuss this with coach Yury Marichev and I’m open to anything. Perhaps in the near future you will see me at OH.

– By the way, on the weekend all-star last season as a outside hitter you have shown yourself beyond convincing.

– I was playing as outside hitter at the preliminary stage of the Russian Cup in the match with “Oilman” from Orenburg and scored 17 points.

– Don’t you think that this year has shown that the depth of the Russian national team is incomparable with any team in the world?

– Yes. Basically, before you could say so. We have a huge country and a lot of top quality players that can compete with anybody and dominate.

This is how Dmitry Muserskiy plays beach...