Iskra won against Dinamo Moscow 3:1 in the Russian Superleague. Gavin Schmitt set a record high 41 points. Aleksey Kuleshov said that the injured Bartosz Kurek was their advantage, but Alexander Markin was successful. 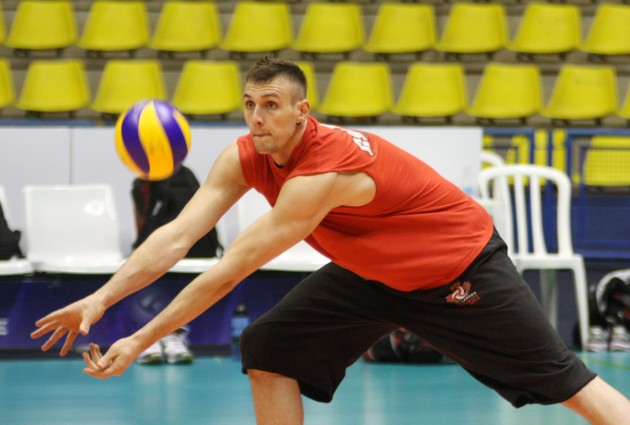 The teams were even at the beginning of the first set. But through successful attacks by Schmitt and Kalinin the home team got to a lead 12:8. Yuri Cherednik took a time out. Sergey Burtsev was in the starting lineup. With his successful attack and an ace, Iskra got to a 5 point advantage – 16:11. Dinamo tried to come back but without success, as they made a number of unforced errors. Dinamo took another break with the score 20:15. Bartosz Kurek got injured in the next attack, and was carried out from the site. Bartosz landed badly and injured his ankle. Aleksander Markin replaced him. This loss demoralized Dinamo. Burtsev and Schmitt scored to win the first set for Iskra – 25:17.

In the second set, guests came to their senses and Sergey Grankin was able to seize the initiative – 14:11. However, soon the picture changed – the hosts started playing better, and aces were made by Sergey Burtsev and Arkadiy Kozlov. Iskra got to the second technical break – 16:15. Gavin Schmitt worked mightily on offense and on the pitch. After his ace the score was 23:20. It seemed that the set was over, but Dinamo made two consecutive points – 23:22. Sergey Burtsev earned the first set point – 24:22. But they won it on the second try, scored by Denis Kalinin – 25:23.

It was a bad start of the third set for Dinamo. After another Schmitt’s attack hosts took the lead – 6:2. Head coach of Dinamo took a time out. Peter Veres took the leadership in the Moscow team, and Dinamo was not only able to catch up with Iskra, but also to get to a lead – 13:11. Home team lost concentration a bit and began to make mistakes that Dinamo used. Guests added to their blocking and successfully closed several attacks. After another block Dinamo made a significant advantage – 20:16. Iskra started to chase the lead. After the blocks by Kuleshov and Bogomolov they reduced Dinamo’s lead to a minimum – 20:21. But the visitors were able to stand up and win in this set – 25:22.

The fourth set was dictated by Iskra, which immediately got to an advantage – 4-0. In the middle of the game, the gap of four points was preserved – 17:13. In the end Pavel Kruglov made a mistake, sending the ball out of bounds. Iskra finished the match in its favor – 25:17.

Alexey Kuleshov, captain of “Iskra” (Odintsovo): “For us, this game was difficult, but we are well tuned to play our first game at home. Dinamo is one of our main rivals, so the victory is doubly valuable. We worked hard to develop communication in our game, as our team was significantly renewed. The fact that Bartosz Kurek got injured, affected the game only partially because the substitution Alexander Markin was successful.”

Yuri Cherednik, coach of “Dinamo” (Moscow):  “Of course, Kurek’s injury definitely affected the result of the game. The little time that we had before the season, was used for basic volleyball. It’s a shame that it happened, but I think that Markin, who replaced him showed a good game. But I believe that we lost not only due to Kurek’s injury. Today they played better. We will analyze the game, and work on. Kurek’s injury seems serious.”