Lokomotiv NOVOSIBIRSK of Russia will play BERLIN Recycling Volleys in the 2013 CEV Volleyball Champions League. In the first round of play Lokomotiv and BERLIN scored a couple of wins against Budvanska Rivijera BUDVA and Jihostroj CESKE BUDEJOVICE respectively. 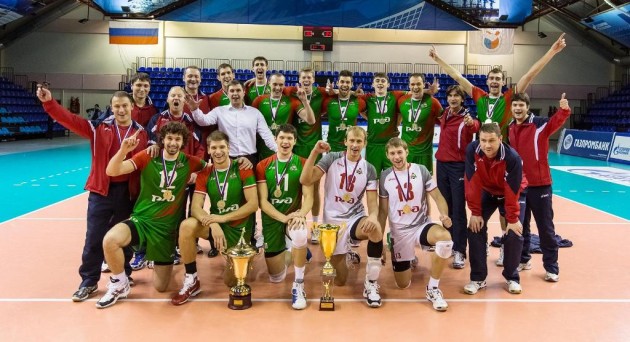 Lokomotiv recently claimed the Siberian Cup for the fourth consecutive year (see picture) and as per decision of the coaching staff, the best players of the group did not travel to Montenegro for the first leg of the Champions League but the “second lines” did very well there scoring a 3:0 win.

NOVOSIBIRSK is currently ranked third in its group of the Russian Superleague having won three matches out of the four played so far. On the other hand, BERLIN is also on full swing after opening the Bundesliga with two wins over VfB FRIEDRICHSHAFEN (3:1) and Generali UNTERHACHING (3:2), Germany’s other representatives in the Champions League.

“We will cross our ways with a very strong opponent and every single home match is extremely important for us as well as for our supporters” says head coach Andrey Voronkov.

“We look forward to hosting the other teams assigned to our group and we’ll be doing our best to score three home wins” adds setter Alexander Butko, a gold medalist from the 2012 Olympics in London. “The support of our fans will add extra motivation and we are confident that we can enjoy a good start”.

ARG M: Fabian Armoa UPCN coach – We are playing at a high pace

YEC M: Russia, too strong even for...