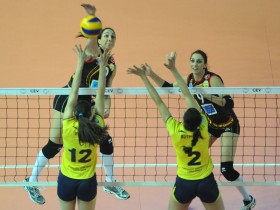 The rookie from Romania caught a good start by moving up 12:15 before Vakifbank scored the next four to set the pace by the second mandatory stop. Vakifbank eventually claimed the opening set at 25-20 with Bahar Toksoy contributing 7 points to the count of Turkey’s heavyweight.

ISTANBUL sped quickly to a 6:2 lead in set 2 and never looked back; Tomis asked for a break as the score stood at 20:15 for the locals but Vakifbank finished it off rapidly at 25-19. The same scenario unfolded in set 3 as the hosts moved up 6:1 and were ahead by three points at the second technical time-out.

Vakifbank seized the set 25-16 thereby claiming its second win with a perfect score of 6 sets won and 0 lost in two matches.

Malgorzata Glinka top scored for the home side with 14 points.

“I would like to congratulate Vakifbank. We are proud we had the chance to play such a strong team and we are all gaining valuable experience by playing such strong sides in the Champions League” says Tomis head coach Darko Zakoc.

“They fully deserved to win and our good tempo in defense and attack was not enough to claim the game today” adds captain Claudia Gavrilescu.

“The starting field of the Champions League is stronger than ever this year, so we always have to keep up our good play. My players are fit especially as they did not have a busy schedule after the Club World Championship we played this past October in Qatar” stresses Vakifbank mentor Giovanni Guidetti.

“We made many silly mistakes but we took the match very easily. We have to prepare carefully for the next game with Azerrail which is coming up next week” concludes captain Gözde Sonsirma.