Baku, Azerbaijan, December 14, 2011. Azerrail BAKU scored tonight its third win in the prelims of the 2012 CEV Volleyball Champions League by edging the reigning champions of Vakifbank TTelekom ISTANBUL in straight sets (25-23, 25-21, 26-24) to claim the provisional leadership of Pool D. 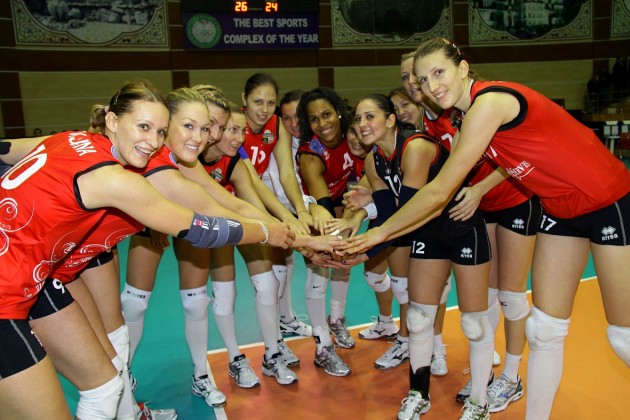 Everything started well for the home side that quickly claimed a small margin via the spikes of Polina Rahimova and blocks of Heather Bown (8:4). The home heroines of Azerrail played with good confidence and set the pace also by the second mandatory stop (16:13) with Rahimova scoring the last point for the final 25-23.

Vakifbank tried to change the situation in set 2 but was not able to cope with the terrific blocks of Azerrail, with Sara Anzanello finishing it off at 25-21.

ISTANBUL was shocked by this poor start, so head coach Giovanni Guidetti made some changes in the line-up for set 3 but could not avoid a 3:0 defeat.

“We knew this was going to be a tough match and even though we won, still we have three more rounds to come” states Azerrail team captain Oksana Parkhomenko.