Schwerin, Germany, December 18, 2011. SCHWERINER SC of Germany is willing to take the right boost from the national league and deliver a strong performance against group favorite RC CANNES of France when it comes this week to the fourth round of action in the 2012 CEV Volleyball Champions League. 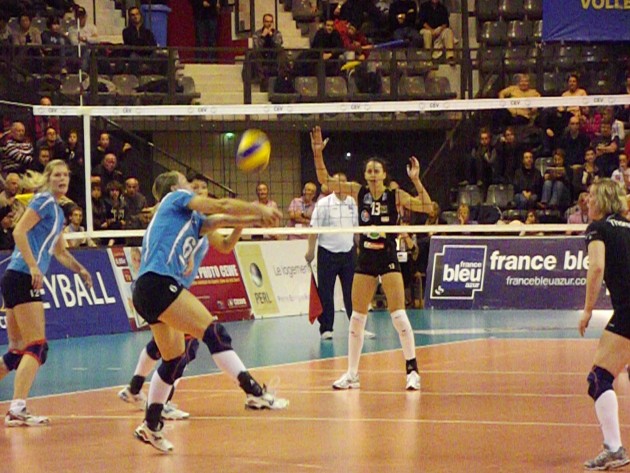 Despite freezing temperatures upon their arrival in Schwerin, Northern Germany, the ladies of RC CANNES looked confident and highly motivated to get a back-to-back win against SCHWERINER SC (SSC). However, the SSC is willing to give the French force a big fight in their home arena “Sport- und Kongresshalle” and maybe take the group favorite by surprise.

Although returning to home ground with a clear loss at the Cote d’Azur the SSC wants to take the boost from three consecutive wins against Hamburg, Aachen and Stuttgart in the German national league to show their fans a great match and top level Volleyball.

SSC coach Teun Buijs promises that “we will see a totally different SSC here at home than in Cannes a week ago. We owe that to our great fans and they expect it from us as well.”

The French champion has a strong line-up with a variety of players from Serbia, Ukraine, Italy, Slovenia and France. With 14 consecutive national championships in France and being on a winning streak of 10 consecutive games, RC CANNES dominates not only their national league but also the Pool A of the 2012 CEV Volleyball Champions League.

After taking the throne of European Volleyball in 2002 and 2003, RC CANNES wants to conquer Europe once again. Its President, Anny Courtade, is convinced that her team is able to repeat the success of 2003 and deliver great games for their fans as they already showed during the first matches in Pool A. Everybody expects a win by RC CANNES but maybe the SSC will freeze the ladies from the Cote d’Azur as the temperatures in Schwerin already did.