Kedzierzyn-Kozle, Poland, December 22, 2011. After losing last week at home at the end of a terrific battle, TRENTINO PlanetWin365 re-asserted its dominance tonight by beating the hosts of Zaksa KEDZIERZYN-KOZLE in three straight sets (25-20, 25-21, 25-9) to get back the leadership of Pool C in the prelims of the 2012 CEV Volleyball Champions League. 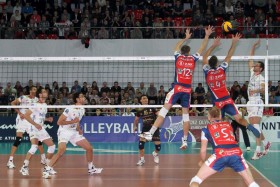 By displaying some world-class play, the triple winners of Europe’s most elitist competition were able to turn this night into a kind of “cold shower” for the many fans in attendance at “Azoty” sports hall.

With the splendid serving of Cuban-born Osmany Juantorena TRENTINO caught an excellent start (4:0, 8:2) and but the hosts gradually got into the game, clawing back from 12:16 to 16 all with great help being contributed by Guillaume Samica. However, Zaksa slowed down the pace right after completing this comeback and TRENTINO could easily seal the final 25-20.

The opening of the second set was a neck-to-neck race with Zaksa being anchored by the spikes of Michal Ruciak and Jurij Gladyr, while Juantorena and Jan Stokr delighted the audience with their fantastic play on the other side of the net. After a tie at 21 all, the last section of the set belonged exclusively to the guests from Italy, with Juantorena finishing it off at 25-21 with a marvelous spike from the wing.

TRENTINO was on a class of its own in the third set with Juantorena and Stokr pacing their side for a massive 25-9 on the scoreboard, with local head coach Krzysztof Stelmach getting no help also from his back-up players that could not handle the power and class of the group captained by Matey Kaziyski.

“TRENTINO showed tonight many great combinations in attack and we were not able to use our middle blockers as we should” says Stelmach.

“We took our lessons from the first match” adds TRENTINO mentor Radostin Stoytchev.

“We finally got accustomed to a ball we do not use in the national league. Zaksa played strong in the first two sets but we finally broke their resistance. I think that in spite of the result both teams showed their skills and determination also for the remainder of this Champions League campaign” adds the Bulgarian coach.