NEW YEAR’S INTERVIEW: Katarina Marinković – „I don’t have preference about where to play in Europe after I’m done in USA“ 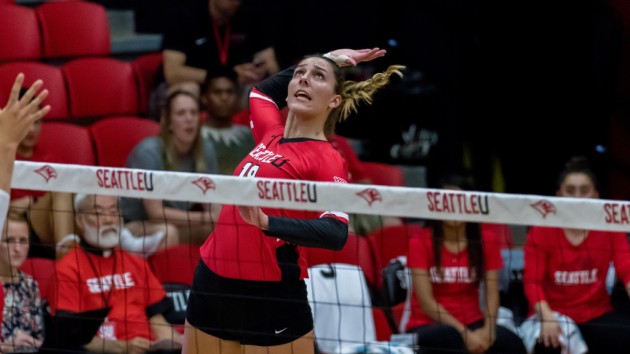 In order to to get an insight into the details of the functioning of such a system, we contacted the Serbian female player Katarina Marinković, who competes in the NCAA for two years already and was named Freshman of the Year (the best debutant) in the Western Athletic Conference while playing for Seattle University Redhawks in 2016. We were especially curious to find out how does such a system look like in the eyes of a foreigner. A 21-year-old outside hitter Marinković, the 2014 CEV U19 European Championship winner and one-time national champion with Crvena zvezda, shared some valuable observations with us.

Tell us about the part of your career in Serbia and which moment was decisive to go to play abroad?

„I would say that my career in Serbia was something that helped push me in the direction of competition and skill level, but I was looking for something different. It was an honor playing for my home country because I was able to be part of the volleyball legacy and importance of volleyball in Serbia. My decision to play in the United States was made when I realized that having a quality education and playing volleyball was extremely difficult where I am from.“

How many positive and how many negative things traveling and visiting many countries and continents while playing for the national team as a teenager bring to such a young person?

„Playing for the national team was definitely a positive experience. Traveling to different countries gave me more knowledge about how others play within different systems and are able to compete at a high level.“

Why did you decide to go to play in college and not, for instance, in some professional club abroad?

„Being able to have a good education along with great volleyball was my goal. Coming to the United States gave me this opportunity.“

Explain to us a procedure of signing up for college as a volleyball player coming from a foreign country.

„Before coming to the U.S. was a very stressful period in my life because of the various tests that I was required to take and apply to the NCAA then waiting for approval to be able to play. I don’t even remember everything but there was a lot of paperwork (laughter).“

How does a system of studying and playing in college exactly work?

„In college, time management is very important. While we are in season we miss a lot of class which is why time management is super important in order to be able to use all the free time that I have to do my studies; at the airport, on the plane, in the hotel room, etc.“

How often do you train in college and which are the commitments an athlete has and needs to fulfill as a member of a volleyball team?

„In season, we practice every day for three hours and lift twice a week. My team has dietary restrictions, such as alfredo, fries, mayo, etc., that we need to follow. Rest is also one of our top priorities and our coaches stress that we need to rest when we are able to. These are actually simple rules to follow and rest is one of the team’s favorite (laughter).“

Since you are sophomore, which means you are in the second year of study, and already should have adapted to living in the USA, describe to us a social life in college.

„Life in America is very different than Serbia. There are many different cultures that I have been fortunate to experience. The food was a little weird at first (laughter). But, I started to like it after awhile. All athletes have a bond which is nice because we all have the same common goal which is to bring pride and a championship to our school. Because we have this bond, my social circle is mainly all athletes because we spend so much time together in the same areas, for example, classes.“

Since this season in the NCAA women’s volleyball is over, when does a serious preparation for the next season start in your college and in general as well?

„Because our season is in the fall, serious preparation starts in the summer, but we have a spring season which is to prepare us for the following season and to sharpen your skill level which is nice because we do not have time to do this in the fall.“

Do you have any idea where would you like to play professionally and would you mind staying in the USA if the professional league gets established in 2018?

INTERVIEW: Manavinejad – “Our opponents are very...