INTERVIEW: Sanja Gamma – “Can’t wait for the EuroVolley in Zadar“

Sanja Gamma, a volleyball brand that has been running for 23 years, and how she started, or more precisely, how she still plays, does not intend to stop there. 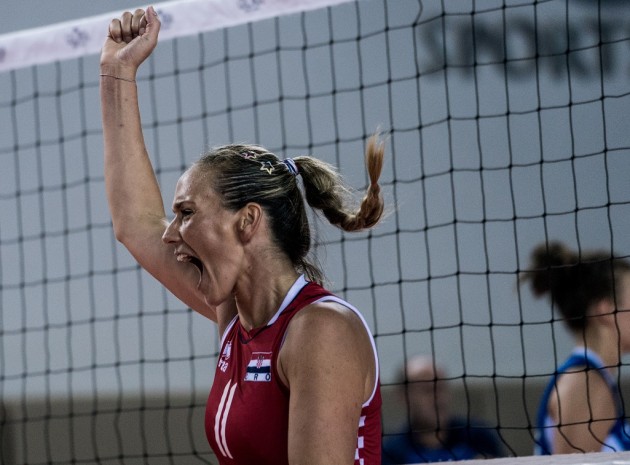 So far, she has been in that rich career for which Europe was too tight, so she also played in Asia, in South Korea, and she played for as many as 19 clubs in 9 countries!

A career worthy of all respect, with the addition that Sanja always comes to the club as an ‘added value’, not as a player who fills in the number at the end of the bench, as evidenced by numerous trophies. Born the winner, always and everywhere the good spirit of the team, ’emotional to the strongest’, Sanja is playing this season in Budapest, in the club of Vasas Obuda.

And the way she plays, with her 36 on her back, she does the lion’s share of work in the club of the famous name, which, until recently, was at a much weaker level in terms of volleyball.

„I have a great time here, I am satisfied, the club is arranged in the right way, the atmosphere inside the team is great, and I can say that I really enjoy it – will always say Sanja, who plays in Hungary in an opposite position, and with whom the club has another our national team member, middle blocker Ema Strunjak.“

„I could play here for another ten years, but as I signed for one season, we will see for the next one. I get a lot of balls, I’m the best server and scorer in the league, so I’m really happy. Despite the fact that as a team we are constantly ‘patching up’ due to injuries because one of the players is always ‘on sick leave’. That’s how I was, because of Covid 19, which I got over in September, and in January I missed one game due to a minor operation,“ Sanja will say.

Her club Vasas Obuda, after successfully passing the quarterfinals, will play in the semifinals of the Hungarian Championship, which starts in three weeks, against Fatum Nyiregyhaze, for which another member of our national team, Karla Klarić, plays.

„At the beginning of the season, they even considered winning the title of champion, but over time, those ambitions were slightly corrected, mostly due to frequent injuries in the team. But the semi-finals will definitely be interesting because I think we are actually all four teams equal in strength and there is no clear favorite. Basically, the league ends in the second half of April.“

Early enough to rest and prepare for a ‘long warm representative summer’.

„I am in constant contact with people from the Croatian Volleyball Federation, I know what this year’s plan is and I can say that I am looking forward to the reunion of the national team and meeting with teammates. My performance in the national team has never been questioned, I am always available, and I am especially looking forward to the European Championship in Zadar. Especially since here in Budapest there is still a very hard lockdown, a curfew from 8 pm to 5 am, a lot of things are not working or closed, matches are without spectators, and going home on some days off has become too complicated due to Covid testing 19. Although Osijek, where my husband’s mother lives, is a two-hour drive from Budapest, unfortunately, I can’t use it. I’m sorry no one can come to me either, and I was really looking forward to visiting friends, because, after a long time in a neighboring country where it’s not a problem to jump home for a day or two, it’s not a crown,“ says Sanja Gamma and adds:

„It was a little strange for me at the beginning in the club because both coaches, head and assistant, are younger than me, but we established a great contact full of respect and appreciation, so everything fell into place in an instant.“

USA W: McClendon – “Racism is something I’ve had to deal with constantly while playing volleyball”

Finland and Slovenia cross their ways in...