The first great engagement of the 2012 international season is round the corner and therefore the Seniors' Men Team coached by Javier Weber works harder and harder day after day. They train at Cenard facilities for the London Olympic Qualification Competition that will take place in Almirante Brown, Argentina, next month giving only one ticket for the greatest tournament every team can dream of. The light blue - white jersey team has already confirmed friendly tours prior to this important Qualification competition. 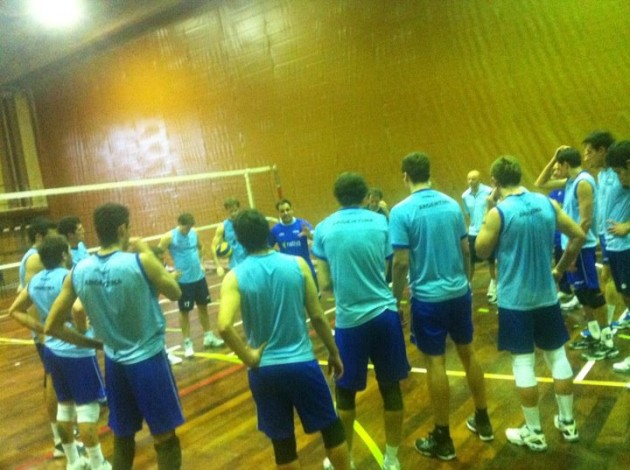 The Argentine team will take two path previous this event. One part of the team will travel to USA and the other will welcome Cuba for a friendly tour series.

The team started working April 10th with those players already free of their yearly league engagements and slowly others were arriving to the concentration.

Six of the summon players for the FIVB World League 2012 already played the final series of the ACLAV Argentine A1 Men Teams League: Facundo Santucci, Maximiliano Gauna, Nicolás Bruno and Nicolás Uriarte for Boca; Demián González and Pablo Bengolea for UPCN with their last match played this last Sunday.

The South American Olympic Qualification Competition (Brazil already qualified) will reconfirm Almirante Brown as one of the most important international volleyball venue after the 2011 Youth’s Boys World Championship took place. This event will take place May 11th – 15th Round Robin – all against all, with Argentina facing Venezuela, Colombia and Chile for the final award, London ticket.

ARG: Alfredo Contreras and his team Work at the development plan for the whole country

ARG: Satisfactory closing ceremony of the setters seminar carried out by the CDRV FIVB in Argentina