The situation could not be better for VfB FRIEDRICHSHAFEN as the German champions seized their home match for the Playoffs 12 of the 2012 CEV Volleyball Champions League against France’s TOURS VB in straight sets. 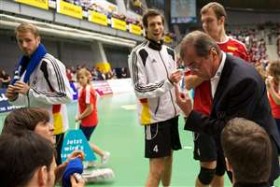 VfB FRIEDRICHSHAFEN does not feel special connection with “golden set”

But that is not enough as on Wednesday night the team from the Lake of Constance needs to score another victory to advance to the Playoffs 6.

If FRIEDRICHSHAFEN loses – the score does not matter at all – the so called “golden set” will decide which team makes it to the next round of Europe’s most elitist competition. “I am not a supporter of this rule”, says coach Stelian Moculescu.

Also team captain Joao José is not satisfied with the clause of the golden set. “The rule is just unfair”, he says. “But it is unfair for everybody in the Champions League”.

The Germans have got bad memories about the golden set from the past season. During the Challenge Round of the CEV Cup they claimed their home match against Poland’s Zaksa KEDZIERZYN-KOZLE 3:1, but lost the away game in straight sets. After losing also the golden set (12-15) the team missed out on a spot for the semifinals and was eliminated from the competition.
Wednesday night the door to the Playoffs 6 is open again. But nobody in Friedrichshafen is taking the challenge too easy. To be prepared as good as possible the team travels to Tours by bus already Monday night and practices there on Tuesday and Wednesday. “Preparing, concentrating and fighting regardless of the result stemming from the previous game” says libero Nikola Rosic about the challenge in Tours. “TOURS is not unbeatable. That we have already demonstrated”.