Тo kill time and continue good friendship created during the previous matches of the European League, head coaches of Serbia and Germany and their assistants played match two on two at Metrowest Sport Palace in Israeli city of Raanana. 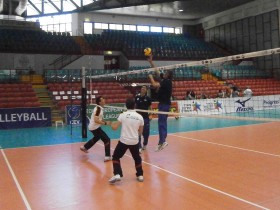 On one side of the network were Giovanni Guidetti and Alessandro Petarni, and on the other Ivan Knežević team director of Serbian national team and assistent coach Vladimir Medenica.

Instead of him came in coach Aleksandar Vladisavljev. The match was full outsmarting, with occasional jokes, and Serbia won both games.

It was a great foreplay to the European League 4th round match of the teams of Serbia and Germany witch started at 14:30.

To read more about this competition, click on European League 2013 W.

EL M: Opava hosts last round of action in Pool B