written by WoV May 2, 2012 source: http://www.abendzeitung-muenchen.de

Max Günthör is leaving after four years in Haching. He is drawn to other countries.Coach Mihai Paduretu in California now looking for new players for the German Volleyball-runner up. 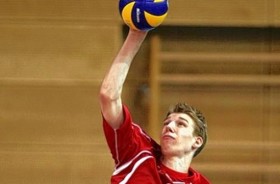 Two weeks Mihai Paduretu had wanted to take a break from volleyball. After the dramatic defeat in the final series of the German Volleyball Championship  against Berlin he planed to take rest. But after a busy week Paduretu must immediately continue his work in Generali Unterhaching. Since Monday he definitely knows that he must find a new captain.

Max Günthör has decided  to leave the club after four years.

“Max has completed his studies and now wants to play abroad and gain experience. He is a very good player, he has completed over 100 international matches. It is difficult to replace him, “said Paduretu, .

On Tuesday Paduretu went  on a nine-day California trip. “I will look at the semi-finals and the finals of the university championships and the Olympic qualifying tournament with the U.S., Canada, Mexico, Cuba, Trinidad-Tobago and the Dominican Republic. Maybe I can find sime players for Unterhaching, “he said to the Abrndzeitung Munchen

According to this article country or club where Max Günthör will play next season are not yet certain.

NORCECA W: Canada advance to the quarterfinals in Tijuana