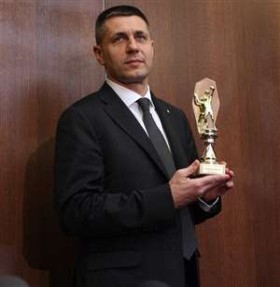 Currently, Bulgarian Volleyball fans associate the names of Stoychev and Kaziyski with both their distinguished Italian club TRENTINO Volley and the national team of Bulgaria.  The fact that they both won their respective polls by a wide margin and adding that Tsvetan Sokolov is the runner-up in the standings for the Best Male Volleyball Player demonstrate the high value the Bulgarian Volleyball community assigns to their contribution to TRENTINO’s fantastic year as champions of Italy, Europe and the world.

Filipova is the new captain of the women’s national team and is viewed by the fans as the most stable player in what was otherwise a pretty shaky year for the “Lionesses”.  The middle-blocker of Russian Uralochka-NTMK EKATERINBURG led Bulgaria onto the top of the Olympic pre-qualification tournament in Baku and put the future of the country’s women’s Volleyball in a better perspective.

In each category BGvolleyball.com nominated seven people with remarkable achievements in 2011.  2’646 unique votes were cast for Best Coach, 2’548 for Best Female Player and 3’427 for Best Male Player.  The final results shaped up the following ranking

HUGE FAIL: When you score ace, but...