The rumors circulated last week that Bulgarian superstar Matey Kaziyski was being courted by coach Placi to return to the team for the 2013 European Champs but it was just a false alarm. 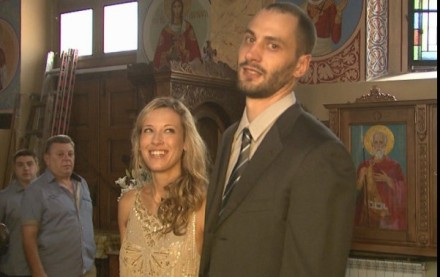 Matey Kaziyski and his girlfriend

At Georgi Bratoev’s wedding last Saturday, Matey took time to speak to the press and stated that he is NOT coming back unless the Bulgarian Volleyball Federation (BVF) undergoes major major internal changes.

“I’ve said it before that I would only return to the team if the Federation makes changes. The problem is that I still do not see any changes, not to say that things are worse than before. So there’s nothing to talk about at all. If there is any change, I’ll be the first one to call the coach.”

In case you you didn’t know Matey has left Trentino and will play for Turkish team Halkbank from Ankara in the 2013/2014 season. Matey also brought his girlfriend at Bratoev’s wedding. She is Italian and her name is Elisabetta Farrugio, a former beauty queen.