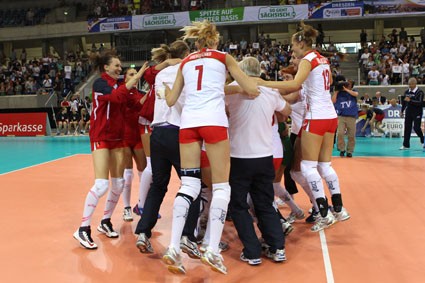 Azerbaijan started with full force into the first set what seemed to be a compensation for the weak performance of yesterday’s match. Natalya Mammadova finally led her team in the usual way after successes in four attacks and two blocks and with a more solid ball passing compared to the first game. There was also a change in the line-up of the team, the middle-blocker Yelena Parkhomenko was replaced by Kseniya Kovalenko. After 11-4 Belarus reacted with a timeout and continued totally confused afterwards. Firstly after the technical break at 16-6 Belarus achieved four points in a row and forced Azerbaijan to a timeout. The Byelorussians continued playing in a unleashed way and led quickly with 18-17. The fulminant hunting-to-catch-up ended in a tight set win for Belarus with 25-23 after 28 minutes.

Despite the 2:0-set-deficit Azerbaijan began the third set with a very strong game and led 8-3 at the first timeout. Azerbaijan acted with more self-confidence and used all opportunities so that the team could go into the second timeout at 12-6. The Azerbaijanian players Odina Aliyeva and Natalya Mammadova brought the deciding points for the team. Azerbaijan was obviously superior in passing the ball compared to Belarus. The Byelorussians tried to give the match new impulses through a double replacement at 17-10. Azerbaijan wasn’t impressed at all and won the set 25-17.

In the fourth set the leadership changed all the time. Natalya Mammadova delivered to great points and the libero Natavan Gasimova supported Azerbaijan with three points ahead to the second technical timeout. The timeout wasn’t good for Azerbaijan as it was 16-16 after two mistakes in attacking. Two fantastic quick attacks of Anzhelika Barysevich and a strong fight Belarus delivers the first match-ball at 24-21, but it was parried by Azerbaijan. Belarus then turned the second match-ball with a block success against an attack of Natalya Mammadova into the final 25-23.

To read more from this competition, click on European Championship 2013.