Fred Sturm is no longer the head coach of Danish national team after spending ten years at the helm of the group. 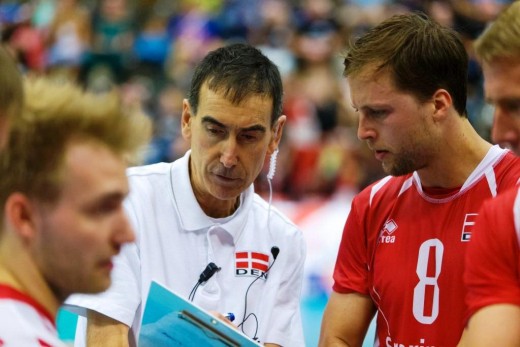 “Fred has contributed a lot to the development of Volleyball in Denmark throughout the ten years he spent with our men’s national team” says the Managing Director of the Danish Volleyball Federation, Mikael Trolle. “He has been one of the major forces that drove our team and helped us make it among the top teams in Europe as confirmed by the fact that they reached the Playoffs at this year’s European Championship” Trolle continues. “We are very happy with the cooperation we had with Fred but after the Junior European Championship held last year and this year’s EuroVolley, the members of our national team won’t spend anymore five months all together, so there is no need for a full-time head coach. This, however, does not undermine our ambitions to participate in as many tournaments as possible, and we do hope we will be among those who make the final rounds of future Championships. We wish Fred all the best”.

Sturm agrees that time has come – after 10 years – for other forces to help Danish Volleyball make it to the next level.

“I am very happy for the opportunity I had to lead our men’s national team for the past ten years. This is something that I will cherish for the rest of my life. This is the right time to end our cooperation and the right decision for the Danish Federation and also for the national team. This experience was a great one for I have been working with many good-hearted, dedicated and caring players, members of the coaching staff and colleagues from the Federation” says the US American coach. “Greatness and true devotion to excellence can be found right now in Danish Volleyball. During my time here this is something that I have witnessed many times with admiration and appreciation. With all these qualities, there is much room for further growth and development. I would like to especially thank Mikael Trolle for the opportunity to work together and for his support to my work. I wish everyone in the Danish Volleyball Federation much success for the future.”

Sturm was appointed head coach of the Danish men’s national team back on January 1, 2003. The Danish Volleyball Federation is still looking for Sturm’s successor.

Drawing of lots for Playoffs 12 coming up on Thursday