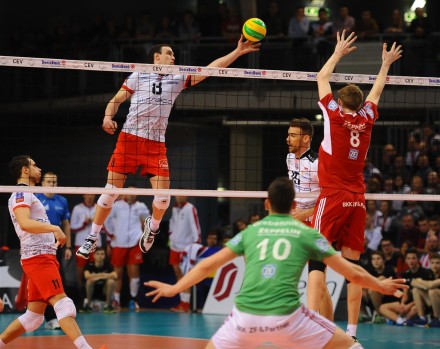 The only lead Friedrichshafen had in the first set was 1-0. Resovia immediatelly took initiative although the guests helped them a lot with two consecutive errors (spike in antenna and disorganized counter attack) – 3-1.

On Resovia’s 5-2 lead, the coach of the German team, Stelian Moculescu, had to call his first time-out. It didn’t help him because Resovia’s setter Fabian Drzyzga distributed balls perfectly, while Jochen Schöps and Piotr Nowakowski turned them into points without making mistakes – 9-2. The Polish squad won 4 points in a row on Marko Ivović’s serve.

Friedrichshafen had so little shiny moments so its setter Simon Tischer had to score and wake up his teammates.

Same story was in the second set. Friedrichshafen failed to realize counter attack at the result of 3-1 (block by Nowakowski) and soon it was 4-1 for the hosts.

Still, in that part of the game, Friedrichshafen played well, but Resovia’s defense was unbreakable and no matter that guests were close (5-4, 6-5), the first techical time-out went on the score of 8-5 for the hosts.

Moculescu had to change something. He wasn’t pleased with the receiving and changed Baptiste Geiler with Moritz Reichert. It didn’t help, after two consecutive blocks by Resovia’s players, it was 10-5.

Moculescu was visibly unsatisfied with how his team played and changed the opposite. Michal Finger replaced Adrian Gontariu on 19-11. On 20-11, Moculescu called time-out. Those were desperate moves by F’hafen’s coach. The second set ended with 25-16 for the hosts.

The visitors had to go on all or nothing in the third set. It was visible with how many determination they played.

Resovia was handicapped at the result of 2-2. Ivović got injured. He stepped on the opponents’ foot while landind and was replaced by Rafał Buszek. The Serbian didn’t come back into the game (ended as second best scorer in his team with 12 pts), he had to cool down his ankle with ice.

His team missed him because since then, Friedrichshafen gained and kept advantage of one point and enlarged it as the set went on – 13-11, 15-12 (Andrzej Kowal called his first time-out in the match), 16-13 and 18-15.

Introducing Reichert paid off to Moculesu. Along with Gauna (15 pts), Vogel and Finger (9 pts.), he helped the German team to win the set although Resovia was close to leveling the score (18-19). Still, Schöps couldn’t play alone. Finally, it was 25-22.

The win in the third set gave wings to F’hafen’s players and they kept pace with the opponent until the result 8-8. Maarten van Garderen was the one who kept guests alive.

But, on the other side, Schöps (the best scorer in the match with 16 points) was simply unstoppable – 12-9!

Moculescu returned Gontariu on the court, but he better didn’t. The Romanian continued playing without concentration – 16-11. There was no comeback for Friedrichshafen – 25-17.