Italy! Finally, after waiting for ten years, the young heirs of the players who dominated the Volleyball arena back in the ‘90s, were crowned junior European champions on Sunday in Gdynia, at the end of a marvelous campaign that was capped by a splendid performance in the final match with Spain where they only lost focus in the second set, but were able to regroup to pull out a splendid 3-1 win (25-21, 14-25, 25-23, and 25-22). This result may be a little surprising especially since Italy had qualified for the Champs only via the third and last qualification round held this past July and hence were not among the top-seeded sides of the tournament. Head coach Marco Bonitta – who had guided Italy’s women to a World Championship title in 2002 – could celebrate another unique honor to be added to his CV thanks to a group whose main distinction is the strength of the collective more than the disposal of single, outstanding stars. 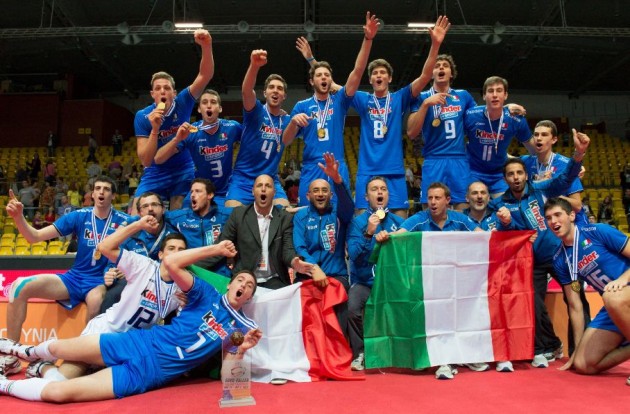 Italy and Spain squared off for what was the remake of another European final, dating back to twenty years ago, as the previous generations had fought for glory in Poznan. By that time Italy eventually claimed gold with a group that comprised some absolute stars of the past decades, like for instance Samuele Papi, Mirko Corsano and Marco Meoni while Spain was anchored by Miguel Angel Falasca and Juan Jose Salvador. All these players have written some memorable pages of Volleyball history and these young guys starring here in Gdynia certainly wanted to start tonight following in the footsteps of such illustrious predecessors.

Spain – the silver medalists from last year’s FIVB Youth World Championship – had made it to the final via a spectacular run and by sweeping all of their matches, while Italy had suffered their only defeat in the tournament to the hosts of Poland by dissipating a 2-0 lead. The “Azzurri” started out with a very good pace (8:6), being extremely attentive also in blocking, and clearly enjoyed the support of the local audience in Gdynia that had resumed to the sports hall in good numbers even though their favorites were not in contention for any medal. Similarly to what they had done in the semifinal with Belgium, the Spaniards regularly fought their way back helped also by a very poor performance displayed by the Italians from the serving line. With Spain that had dangerously moved up 19:17, Italy’s coach Marco Bonitta finally called for his first time-out, his guys responded well drawing level by finalizing the next two attacks with Sandro Caci and Luigi Randazzo. Via a service winner by Fabio Ricci, Italy got to the front at 22:20 and played superbly also the next couple of rallies to get four set balls, with the second being cashed on a net violation by Spain (25-21).

Spain found the right way to impose their tempo in the early phases of the second set (7:3); the efficiency showed by Italy’s defense line had decreased dramatically and this resulted into a quite embarrassing 16:8 lead for the Spaniards by the second mandatory stop. The best scorer of the tournament, Spain’s opposite Andres Villena, gradually started his personal show and this section of the game looked completely compromised for Italy as the deficit had moved up to 10 points (18:8). Although Italy could score some more points, Spain dominated the scene with real mastery and pocketed a well-deserved 25-14 that let the game re-start from equality.

Bonitta did not change much in his starting six for set 3 with the only variation being middle-blocker Andrea Mattei, Villena continued bombing the Italian defense line from every angle of the court but the score stayed relatively close by the first technical time-out (8:7). The “Azzurri” showed great determination and fighting spirit as they completed their chase and eventually cruised past in the score for the first time (10:9) and a spike by Luca Borgogno even stretched the margin to two points (12:10). Italy fought hard to keep that small cushion up to the so-called money time and an ace by Mattei contributed the 22:19 that probably let them feel they could take a little breath. Villena immediately punished his opponents making it 22:21 first and then 23 all. However, he sent the next attack into the net, Italy was presented with a set point and Caci blocked his Spanish counterpart for the final 25-23 and provisional 2:1.

Only one set separated Italy from the European crown and even though Spain fought intensively with the weapons all of their opponents had got familiar with, the “Azzurri” did always show the right composure thereby going up 18:14. It was nevertheless still too early to glance at the finish line, as Spain leveled the count once more at 18 all. More emotions were to follow, Italy went up 21:19, Caci well exploited the touch of the Spanish block to claim the next point, the countdown started as Randazzo scored for the 23:20, a splendid second touch by setter Marco Izzo piled up three match balls and the party could follow as Mattei cashed the second opportunity to become… European champions!