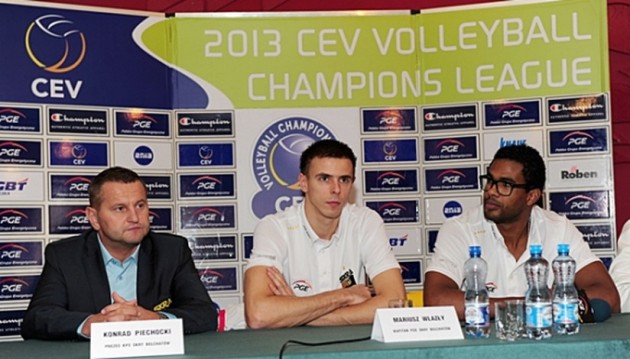 The presentation for the fans was held in the main entertainment spot available in the city of Belchatow. The fans gathered round the scene where all the players were introduced by some professional DJs. The presentation was accompanied by a performance of the well-known “Video” music band. “It was a great feeling to take part in such a show. Now I can feel how great it is to play for PGE Skra, for this sort of fans” stated Yosleyder Cala, one of the players that were added to the roster for the 2012/2013 season. The Cuban player, who also holds American nationality, got the chance to feel this atmosphere last season when he played for TOURS VB versus PGE Skra in the 2012 CEV Volleyball Champions League. “Playing in Lodz in front of 10’000 fans was great. But then they supported my opponents, now I am on the proper side” laughed Cala.

Cala and another “freshman”, setter Dejan Vincić, took part in the press conference before the first match of the 2013 CEV Volleyball Champions League alongside team captain Mariusz Wlazly and coach Jacek Nawrocki.
“Mariusz also should be considered as a new face in our starting line-up. He has been playing nearly 10 years for PGE Skra, however he changed his position. After Bartosz Kurek decided to continue his career with Dinamo MOSCOW, we decided to move Wlazly from opposite to outside hitter. It won’t be easy for him and for the team, but we were forced to do it, to fight for all possible trophies” stated Jacek Nawrocki.
“I may be used on both positions. We will see how this change works. I will do my best for the club” Mariusz Wlazly stated. He was chosen MVP in the first match of the season when PGE Skra beat Asseco Resovia 3:0 to take the first-ever Polish Supercup, quite a good omen for the coming season.
“We lost the championship to Asseco Resovia for the first time in 8 years and we want to regain the trophy, it’s our main aim. We also want to win the Champions League. We were so close last season that we still cannot forget it” stated Konrad Piechocki. The President of PGE Skra stressed that it will not be an easy task: “We were drawn in a very tough group with Dinamo MOSCOW and our former player Bartosz Kurek plus Fenerbahce. However, we will be supported by 11’000 fans in Lodz on every match and we cannot disappoint this great crowd”.

PGE Skra lost not only Bartosz Kurek, the biggest star of Polish Volleyball, but also middle blocker Marcin Mozdzonek, the Polish national team’s captain. One of the best middle-blockers in the world opted for the offer submitted by Zaksa KEDZIERZYN-KOZLE, another contender for the Polish championship and Champions League challenger.
“I know that the team has changed but the aspirations did not. I hope to win trophies with PGE Skra. That is why I left ACH Volley LJUBLJANA and moved to Belchatow”, stated Dejan Vincic.

PGE Skra starts the 2013 Volleyball Champions League campaign on Wednesday, October 24, when Fenerbahce comes to Lodz. All the Champions League matches will be played at Atlas Arena in Lodz, the venue of the 2010 and 2012 Final Four.

Fitness by Alessandro Bracceschi: Nutritioning for sports and health (part 2)