Some days ago ECC President Riet Ooms traveled to Siberia and namely to the city of Omsk to inspect the facilities that this coming March 16-17 will be playing host to the final four of the 2013 CEV Volleyball Champions League – Men. This and other volleyball news read on Worldofvolley.com. 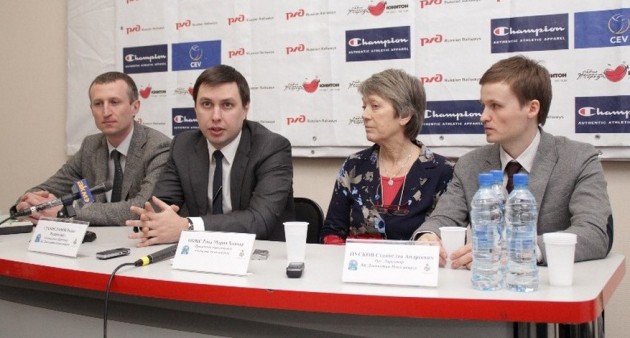 After inspecting the “A. Blinov” sports complex Mrs. Ooms joined a press conference that officially kicked off the countdown for this major highlight of the 2013 Volleyball season.

“It is a real honor – and I am speaking for all authorities from the Omsk Region – that our city was chosen to host an event of such significance” said Anton Cheshukin, Minister of Youth, Physical Culture and Sport of the Omsk Region. “Our region is quite experienced in staging major sporting events and therefore we will do our best to make sure that all players and fans will enjoy the atmosphere of a real Volleyball fiesta” he continued. “Even though some six weeks are still left, many people have already expressed their interest in buying tickets to attend the final four”.

The local organizers represented by the general director of Lokomotiv NOVOSIBIRSK, Roman Stanislavov, informed the media that daily tickets will go on sale this coming March 1.

“There is still one month and a half before the final four but we all can feel that special atmosphere in the air” said Mr. Stanislavov. “This tournament is a major effort not simply for our club or the city of Novosibirsk, but also for the Siberian Federal District as a whole too. We do hope for the support by the local fans here in Omsk and for this special occasion we may change the denomination of our team from Lokomotiv NOVOSIBIRSK into Siberian Lokomotiv” Mr. Stanislavov joked before adding: “We have foreseen for the fans from Omsk as many seats as for our supporters that will be coming over from Novosibirsk”.

“It is the first time that the final four of the CEV Volleyball Champions League is taking place in Siberia and anyway so far away from Central Europe” stressed ECC President Riet Ooms. “It is also a tremendous challenge for the club of Lokomotiv NOVOSIBIRSK as the final four will be held some 700 km from their home town. However, we are convinced that the sports hall here in Omsk will be filled up to full capacity as we know that people from Siberia are fond of Volleyball. We have seen that many spectators have been following the home matches played by Lokomotiv as well as by Omichka and Siberian fans are known for their enthusiasm and passion. In this sense we can expect an atmosphere very similar to what we got to experience last year in Lodz as the final four was hosted by the club of PGE Skra BELCHATOW” added Mrs. Ooms.

The organizers promised that a majestic show will run in conjunction with the final four and they also confirmed their intention to play semifinals and finals at 16:30 and 19:30 local time (CET +6).

POL M: Dawid Dryja – “We did not use our opportunity”