Constanta, Romania, March 11, 2012. Tomis CONSTANTA will play host to Politechnika WARSZAWSKA of Poland this coming Wednesday in the first semifinal round of the 2012 CEV Volleyball Challenge Cup. This is the third time Romania’s champions are challenged by a Polish side in the European Cups after back in 2008 they missed a spot for the final four of the CEV Cup losing at the golden set to Wkret-Met Domex CZESTOCHOWA. 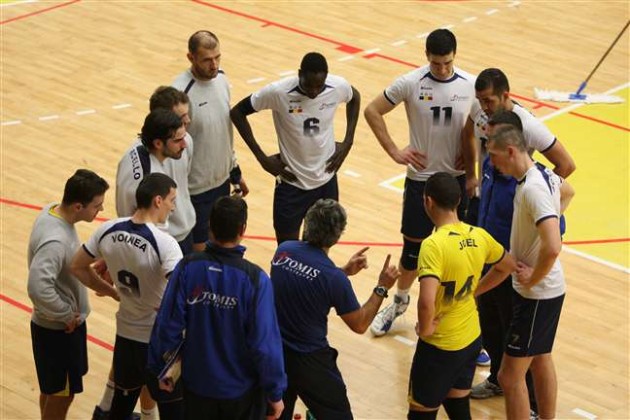 Tomis CONSTANTA aims to extend invincibility to semifinal round

One year later, in 2009, as Tomis joined the final four of the Challenge Cup in Izmir, they lost 1:3 in the semifinals to JASTRZEBSKI Wegiel.

The club President Sorin Strutinsky hopes for a great home show of his side: “Volleyball in Poland is much stronger and popular than in Romania at the moment but I still hope we will seize the night”.

“We are happy for having made it to the semis but we want to achieve more” adds head coach Jorge Cannestracci. “They have got experienced players in their roster so to win we have to play really well”.

“This is going to be a tough match as Politechnika is a strong team. However, we are pleased to play this semifinal in front of our supporters. To make it to the final of the Challenge Cup we have to score a win on Wednesday” stresses local hero Florin Voinea.

Tomis is still undefeated this year in the Challenge Cup having edged in the previous rounds MOK BRCKO Jedinstvo of Bosnia and Herzegovina (3:1, 3:0), Stiinta-Explorari BAIA MARE (3:1, 3:0), Cyprus Nea Salamina FAMAGUSTA and Maccabi TEL AVIV of Israel in the 1/4 finals (3:0, 3:1).

CEV CUP W: Romanian heroines are looking for another sensation in Constanta