Arkas IZMIR edged on Wednesday Marek Union-Ivkoni DUPNITSA in the last round of action for prelim Pool F to cement its second place in the standings. Find the latest news from World Club Championship on worldofvolley.com. 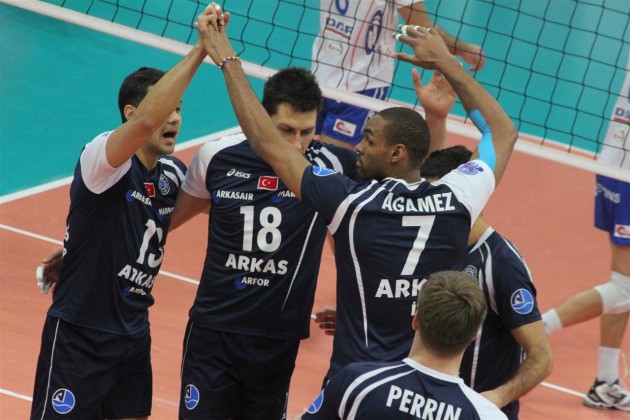 Arkas IZMIR caught a terrific start going quickly up 2:6 with the attacks killed by Liberman Agamez and John Gordon Perrin, forcing DUPNITSA head coach Nayden Naydenov into an early time-out. Marek responded by reducing bit the gap (4:8) but it still trailed by 4 points at the second technical time-out. However, helped by some mistakes of IZMIR, the hosts fought their way back to 20 all and in the deciding final rush – although they are still young and rather inexperienced – they could cash the opening set with the score of 26-24.

In the second set the score stayed initially very close (8:7 for Marek) and that slight margin was kept also halfway through the set (16:15). As the absolute star of  could open a gap of two, Arkas head coach Glenn Hoag stopped the game, his guys responded by tying at 18 and another close run followed until Arkas sealed the final 28-26 with two points scored by Agamez and Perrin.

Things did not change much in set 3 with the score remaining very tight there as well before a kill by Valchev and a block on Agamez moved DUPNITSA to the front (20:18). Even though Hoag tried to find a way to stop the good play of the hosts, Marek Union-Ivkoni could stay cool and claim the provisional 2:1 (25-23) in the set count.

A similar story unfolded also in set 4, at least up to the first technical time-out, before Agamez and Mustafa Koc powered IZMIR to the front (7:11). As his guys were trailing 10:14, Nayden Naydenov asked for a break but Arkas played very aggressively and stretched its lead up to eight points (12:20). Naydenov, seeing that the set was gone, decided to give a break to his best players to keep energy for the tie-break but there Arkas jumped off to an early lead (4:8) and did not slow the pace eventually pocketing that much desired win (12-15).

“Congratulations to Arkas even though I am very disappointed because we had good chances to win tonight” said Bulgarian mentor Naydenov after the game.