Heynen for WoV: „When I look back to it, I still feel so happy that we arrived safely back to hotel“

Despite the fact that Week 4 of the 2019 FIVB Men’s Volleyball Nations League is coming to its end, some happenings from the previous week of the tournament are still at the spotlight – and not because of volleyball related stuff. 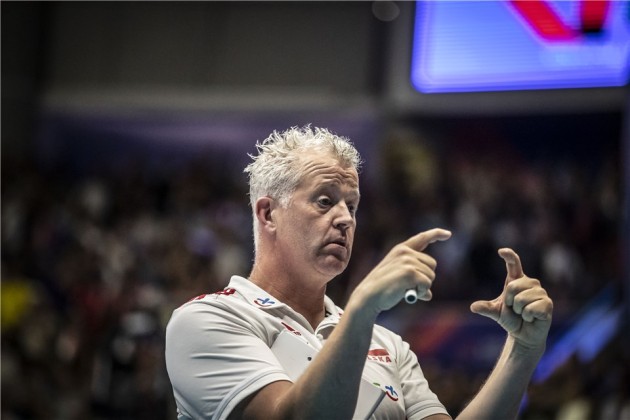 The animosity between national teams of Iran and Poland has been present for a few years. The behavior of players on the court and the disrespect that they are showing to each other contributed to this. That is why every mutual encounter between these two national teams draws more attention than any other matchup in the world volleyball today.

On Week 3 of the 2019 VNL, Iran and Poland faced each other in the city of Urmia. The hosts prevailed and, knowing that there were no incidents neither on the court nor in the stands, everybody thought that all went well. But, Poland head coach Vital Heynen spoke of some after-match happenings that no sports team should experience. In an interview for our website, the Belgian expert stressed that his complaints are not related to the Iranian fans nor people there in general as some might conclude from the statements he gave upon returning to Poland from Iran.

“I think that people in Urmia, the fans on the street and the fans during the match were great, just amazing. I heard no negative support for the team, no negative cheering. Every day, I was walking on the street from the hotel and people were shaking hands with me, taking pictures. Really, Urmia is a volleyball city. I think that I’ve never seen a city like this, so volleyball oriented. I had a great meeting with a mayor… so many positive things. The hotel and food were very good, the people in the hotel were really doing everything that could be done for a volleyball team.“

But, Heynen’s good impressions spoiled a lot at the end of the match.

“What has happened after the match between Iran and Poland? They put us on the bus. The distance between the hall and a hotel was about, I would say, three and a half kilometers. I know that because I was walking it every day. We were guided by, according to them, two police cars but I saw only one police car in front of me. Maybe there was a police car behind us, I never checked that. There were two policemen in the car in front of us. They guided us and it was very busy on the street because people were celebrating the victory. They told us they will clear roads for us and that happened in the beginning but then, in the last 300-500 meters, all streets were blocked. Since ten cars can’t block roads, it had to be hundreds of cars but I wasn’t counting them. There weren’t ten nor hundred of people, there were much more on the street and on the sidewalks. I guess thousands of people. Then our bus got stuck, really stuck, standing still, couldn’t move. I think we were moving the last 300 meters for more than an hour. In the beginning, we thought OK, being stuck isn’t a big problem when standing the first five minutes but then we saw that there was no chance of moving forward. In the beginning, most people were only celebrating around the bus. That’s no problem, celebrating a victory was nice. And I think 90% of people were celebrating but when you put a bus in the middle of the street, it is visible from the distance of several kilometers. We were an attraction for all the people in the area so, after a while, there was a group of people, a small percentage of people, that wasn’t behaving nice. They were showing different symbols than symbols of victory. You should understand that my job as a coach is to try whatever I can. And I felt very powerless – two police officers, thousands of people. I was thinking – I hope nothing will happen. So we were trying to be as friendly as possible, smiling and hoping that nothing will happen and that 10% won’t influence the 90% that were celebrating and who were great. But it gives a very strange feeling.“

Heynen explained that no sports team deserves to face this.

“I hope that everybody understands that sitting in a bus in Iran and with so many people around it gives you a feeling that you’re not in charge and that you can only hope nothing will happen. It gives me, not so much to me because I’m too old, but to my team for whom I’m responsible a feeling of not being safe. That’s what I was speaking about afterward and some people found it crazy. I’m curious to hear how other people see the situation like that when you’re are standing there for more than one hour. I don’t know, maybe I’m crazy, maybe. But I don’t think so. When I look back to it, I still feel so happy that we arrived safely back to a hotel. The situation could explode at any moment and don’t think that sports teams should be in that situation. I am even open to listening to other people’s opinion. This was my most memorable experience of coming back from a game. I’m absolutely sure about this.“

Poland head coach said that it was not up to him to decide on who was responsible for what happened in Iran.

“I’m not complaining about Iran, Urmia, people, and hospitality but about the organization that wasn’t able to bring us back safe. It’s for other people to decide on the responsibility of the organization, not me. It should’t happen that a team goes from a hotel to the match and from the match to a hotel in unsafe conditions. That’s why I protest and bring this up. It’s unacceptable.“

POL W: Win for the Bielsko-Biala and...