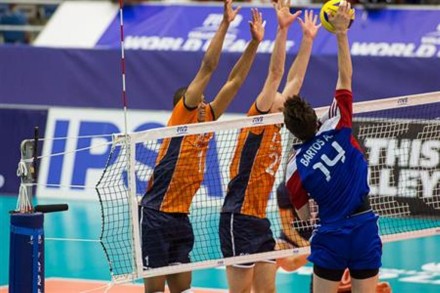 In the decisive and disputed fifth set, both teams competed for every point. The tie-break went to 8-8, after which the Netherlands rebounded to lead by two points. The Czech team fought very hard to get the score back to 14-14 and the atmosphere in the hall was electric. Robin Overbeeke’s two attacks clinched the five-set victory for the Netherlands, however, who were finally victorious 3-2 (19-25, 13-25, 25-18, 25-17, 16-14).

Czech coach Šmejkal said:“We played well in the first two sets. After, the Dutch team changed setters and we did not react at all. In the rest of the match, we basically played through the center and there they were faultless. The Netherlands read Habr’s play well, so I tried Hanik, but the result was the same.”

Dutch coach Edwin Benne said: “This was a particularly tough match. In the first set we had problems with passes. In the second set, we had problems with everything, we totally lost concentration. I pulled out the captain due to injury and then the team suddenly found how to play. The Czechs still played their game. We brought in even more energy and they began to fail, their services were weaker and weaker and gave us a chance to tie-break.”

WL: Brazil down – Iran pulled off another victory!