From fan to technical staff of national team

Over the past few weeks James Wilroy, our Data Volley Manager in USA, has been corresponding with former students regarding scouting; one student Yinet Cruz in the Dominican Republic wrote the following essay. 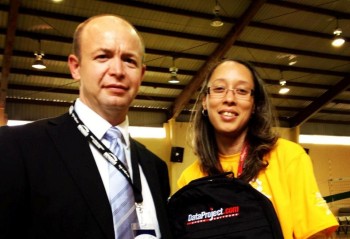 “I have always been a volleyball fan even though an injury got me out of playing the sport I love I was always up to date with the rules and information of the FIVB and NORCECA.

I started working with the Santiago’s Volleyball Federation back in 2009 helping coordinating the tournaments, press releases and statistics since I had experience with the Volleyball Information System (VIS). I even implemented a simple statistic system for the tournaments we held annually that are now used in some of the national tournaments so everything was better than expected.

In 2011, the president of the local Volleyball Federation chose me to attend a course in Santo Domingo that will change my life forever. The name of the course: DATA VOLLEY and VIDEO.

It was an advanced statistics course and it was going to last a week. I contacted one of the instructors who gave me a little overview of the course and it sounded really interesting. The day came and in the first of class all the students taking the course realized one thing: “it was not gonna be as easy as we thought”, in my case due to the fact that I had VIS filling my head.

As the days passed by in the course, we learned that once you get used to the software it is not that hard. I finished with a medium level and since I was not working for a formal team and wanted to learn more I decided to take a chance and go to the course held in Mexico in 2012 which was the best thing I could do because it helped me to understand some things I did not have clear. That same year I was able to attend a round of the Grand Prix to practice with Yeivic Jimenez, one of the instructors of the course, and in 2013 the call was received.

The statistician of my national team was attending a World Championship and was not able to work in the first round of the Grand Prix and they wanted me to be the scout for that round in Santo Domingo. I was amazed and scared because it was going to be the first time working with a formal coach and in a national team. It was a dream coming true!

Everything went great due to the practices I performed after the course was finished. Even though I was not working with a team, Data Volley allows you to practice with any game at any time. This helps you a lot.

Taking videos from YouTube to scout and to do the montages was a very good help to perform well in this first task. Also practicing the codes with the local tournaments helped me to develop the agility to work and develop Data Volley code entry skills.

I just recommend to keep practicing every time you have a chance and if you have questions always ask them to clarify any doubts you may have because Data Volley / Video is like a video game, the more you play the more levels you earn.“

To read more interesting articles click on our Did You Know? section.

On our web-site, you can find a lots of scouting video.